A Week from Monday is a publication with a CD that gathers together the sonic and visual results of the residency – with the same title – organized by Viaindustriae and Holydays in Scopoli (Italy, PG) in September 2020. It is a diary of the seven days spent with visual artists Giacomo Infantino and Francesca Ruberto and musicians Laura Agnusdei, Matteo Pennesi, Luca Sguera between sound investigation, visual research, and exploration of the landscape. The seven days of the residency are mirrored in the seven tracks on the CD, as well as the seven ‘chapters’ of the diary. But this cadence of seven should not be taken too literally; indeed the contents are composed of texts fragments which should serve to evoke rather than describe, combined with photos, scans from documentation produced during the residency (technical notes, shopping lists, menus) in a collage intended to suggest and create connections not evident at first glance. 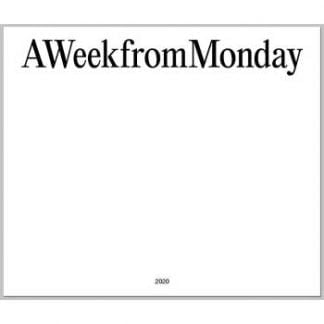 You're viewing: A WEEK FROM MONDAY. Ediz. italiana e inglese 20,00€
Add to cart
Manage Cookie Consent
To provide the best experiences, we use technologies like cookies to store and/or access device information. Consenting to these technologies will allow us to process data such as browsing behavior or unique IDs on this site. Not consenting or withdrawing consent, may adversely affect certain features and functions.
Manage options Manage services Manage vendors Read more about these purposes
View preferences
{title} {title} {title}