“I knew my father Abd al-Rahman al-Khamissi through stories told to me by his friends. I heard about so many different sides to him that my father sounded like he was thirty men living in one body that doesn’t sleep. My father lived in most neighbourhoods of Cairo at different times. He made friends with all sorts of different people who wouldn’t seem to have anything in common with one another. He wrote poetry, stories and articles, composed music, wrote scenarios, directed cinema and theatre and he established a theatre company. He was the one with the golden voice over the radio, he wrote and directed radio series. He believed in revolution, colours and tomorrow. He believed in love and in beautiful roses that he watered with his poetry. He lived dreaming of justice for the human race and he lived by his dreams, “as they are boats we built out of sandalwood and through the flames of hope we pushed them with messages in the sea of future”.
And here is one of his artistic messages sailing through the future and witnessing light thirty years after his death.” 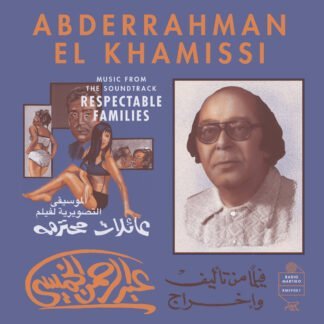 You're viewing: Abderrahman El Khamissi – عبد الرحمن الخميسي / MUSIC FROM THE SOUNDTRACK “RESPECTABLE FAMILIES” 25,00€
Add to cart
Manage Cookie Consent
To provide the best experiences, we use technologies like cookies to store and/or access device information. Consenting to these technologies will allow us to process data such as browsing behavior or unique IDs on this site. Not consenting or withdrawing consent, may adversely affect certain features and functions.
Manage options Manage services Manage vendors Read more about these purposes
View preferences
{title} {title} {title}