During the 1950s Faradjallah was booked as a singer for surprise parties with friends. He started to write his first songs including “L’gnawi” in 1967 and wanted to make people discover Gnawa culture, or maybe rather his take on the culture to be more exact. Faradjallah recalls his first in- teraction with the genre in the streets of the Dern neighbourhood, where he used to go to elemen- tary school. Gnawa is one of the essential musical genres of Morocco. It combines ritual poetry with traditional dances and music linked with a spiritual foundation. Musically a lot of influences originated from West Africa as well as Sudan. Gnawa is usually played by a selection of specific instruments such as the qaraqab (large iron castanets centrally associated with the music), the hajhouj (a three string lute), guembri loudaâ (a three stringed bass instrument) and the tbel (large drums). People would put shells on their clothes and instruments and use incense at their parties. “Sidi darbo lalla – lala derbo khadem…” came from Gnawa verses Faradjallah used to sing when he was 14. The lyrics tackle a global (im)balance of power and the question of social status in this course.

The band Attarazat Addahabia was formed in 1968. The original line-up included 14 members, all from the same family. They played their first small concerts here and there starting in 1969. Later in 1973 they performed bigger shows for instance at the Municipal Theatre followed by the “Al Massira Show” at Velodrome Stadium in downtown Casablanca. Their first album “Al Ha- daoui” (the one you are listening to) was recorded at Boussiphone studios in 1972 and was never released before. Nobody seems to remember the exact reason why Boussiphone ended up deci- ding not to put the album out. The album’s title track also served as the basis for Fadoul’s “Mak- toub Lah”, who frequented the same circles as the band for some time.
Their shows sometimes could go as long as 12 hours, starting at 5pm in the afternoon, with an occasional break here and there. In the 1980s the band took a brief break. Faradjallah recalled the reason for that break like this: “Zaki, the bands drummer, had fallen in love with a young girl from Mohammedia. Soon after, he fell very ill. The group members were convinced that the girl had given him ‘s’hor’ (a kind of local Moroccan version of “black magic”). For four years, the whole group stopped playing. It was unthinkable to find another drummer to replace Zaki, even temporarily.” So they waited four years for Zaki to “get back on his feet” before going back on stage.
Apart from very few gigs here and there Faradjallah stopped playing music in the mid 1990s. Some members from the younger generations formed a new band and still play frequently to this day. Faradjallah runs a television repair shop coupled offerings beverages and snacks in the Be- levedere /Ains Sbaa district of Casablanca. While Faradjallah was primarily a musician, he would work for the local cinema and paint their posters for new movies by hand and he designed all artworks and cover posters of the band. And this eventually led to him participating actively in our first exhibition dealing with Habibi Funk’s work in Dubai 2018. He helped us by creating calligraphic complementations on large photo prints for that show. 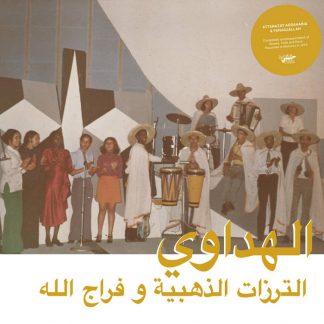