Originally released in 1989, these original compositions are steeped in South African musical traditions yet infused with the singular visionary craft of Smiles Makama, the innovator and wizard from eSwatini (Swaziland). Mbiras, marimbas, percussions, musical bows and bewitching vocal harmonies sustain political and spiritual mantras for an ecstatic trip reminiscing of the best work of Nana Vasconcelos, Don Cherry, Malombo and Soweto based band BCUC.

Azumah was the coming together of a group of talented young dancer-musicians from Soweto (South Africa) with musician and instrument-maker Smiles Mandla Makama of eSwatini (formerly Swaziland). ‘Long Time Ago’ is the surprising and enticing, resultant album from 1985, recorded in the house of theatre stalwarts Des and Dawn Lindberg in Johannesburg.
Produced by David Marks (3rd Ear Music, Hidden Years Music Archive Project), Des Lindberg and Smiles Makama, this album takes us back to a priceless musical moment in the dark and wild eighties of apartheid South Africa. Smiles Makama is a gifted and visionary music-maker. He was born in South Africa but grew up in eSwatini, the small kingdom enveloped by South Africa and Mozambique on each side. He tells the story of the process leading to the recording of this remarkable album: “I was invited from Swaziland by a Soweto-based group, Azumah. […] One of the members knew that there was a wizard in the mountains in Swaziland, building instruments. As I was in the mountains in my hut and then I saw people arrive. They found me. It all started there. […] They invited me to train them because they were dancers, so I came with all the marimbas and all the other instruments which I had in my house in Swaziland. We were rising up in Johannesburg, becoming popular and getting jobs and it was looking like we were a very promising group.”
Smiles had met David Marks before in eSwatini and through the Market Theatre in Johannesburg and they were reunited when this album was recorded. Marks remembers working with Makama favourably: “Smiles would always be on time – he was always disciplined, and he always made a plan. […] If it was a loose jam, Smiles would crack the whip but in a nice way.” This album recording came about at a time when Marks’ approach was to book venues which were open to anyone (a challenge during the apartheid period) and then simply set up the stage for recording. The Azumah recording took one day and when thinking back to it, Marks stated: “People still don’t know about the magic [Smiles] created”.
Predictably, the short, political mantras woven through this album led to Makama, as the composer, being harassed by the South African police and these experiences contributed towards him leaving for Europe.
Instead of simplistic images of a generic ‘Africanness’ or ‘South Africanness’ and pictures of constructed and exotic ethnic identity, a contemporary, fresh listen to this album encourages an appreciation of the composition and musical skill at play in this music. Few people speak about the individual innovation and experimentation involved in the creation of this music (or the music of Amampondo for instance). ‘Woza Moya’ sticks out as a dark and melancholy creation, different tonally to what has come before, evoking the work of Naná Vasconelos or Don Cherry.
One thing that remains the same decades later is that encouraging deeper listening to the sounds of the mbira, the nyunga-nyunga, the uhadi or makhoyane bows is still challenging. Smiles continues his work in eSwatini – building instruments, playing and engaging with cultural and political bodies to get recognition for his smilerphone invention, the makhoyane and other indigenous instruments and musics. Discouraging the superficial, short-lived acknowledgement of this ‘unchanging’, ‘African cultural expression’ (as we see regularly from industry bureaucrats, politicians, and even musicians who play other styles of music) is the everlasting hurdle. This is made so much easier by albums like ‘Long Time Ago’: when artists create music to be loved and entangled with, to be challenged by, derived from the musical roots and structures of these instruments and then expanded upon with creative freedom, risk, humour and funk. Azumah did this in 1985 and we have this album again today, newly released, to remind us of that moment and the moments since when musicians have turned inward and done similar. As Smiles has it: “Indigenous music doesn’t fade out. It’s just waiting to be discovered, all the time.” 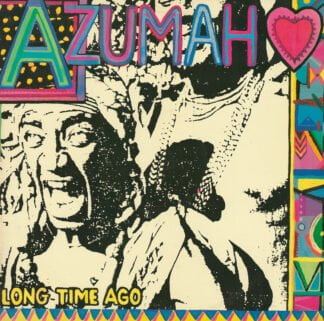 You're viewing: Azumah / LONG TIME AGO 25,00€
Add to cart
Manage Cookie Consent
To provide the best experiences, we use technologies like cookies to store and/or access device information. Consenting to these technologies will allow us to process data such as browsing behavior or unique IDs on this site. Not consenting or withdrawing consent, may adversely affect certain features and functions.
Manage options Manage services Manage vendors Read more about these purposes
View preferences
{title} {title} {title}