Cambodian Liberation Songs is a painful call from forgotten resistance fighters, it is a captivating and moving record. It works as a witness of Cambodian history, bringing to the world the breathless voice of the members of the resistance from the Banteay Ampil Band.

Released in 1983, Cambodian Liberation Songs is a mysterious and overwhelming record. As a genuine piece of history, this “call from sorrow and fierce passion” makes use of a whole range of Cambodian music, from folk to rock, to express sufferings and complaints.

On 17 april 1975, the Cambodian people, already crushed under national and international conflicts, was commanded by force to forget their own past, it was annuum 0 of the Khmer Rouge calendar. Four years of genocide would follow before the start of a war opposing the Vietnamese army to the Khmers Rouges. Resistance units engaged in the conflict against what they considered as a Vietnamese invasion. This record, produced by a resistance group, was given the reference number KHMER 001. It was undoubtedly the first record composed and performed by non-Khmer Cambodians after the tragic events of 1975-79.

The Banteay Ampil Band was created in the refugee camp of Ampil, at the border with Thailand. Musicians and female singers, who had hidden their talents during the genocide, then gathered around the composer and violinist Oum Dara to engage in a new struggle: the resistance. Oum Dara, who had been a composer for Sin Sisamouth and Ros Srey Sothea among others, adapted several of his creations. It is therefore with a poignant charm that the Banteay Ampil Band binds together the golden age of Khmer music from the 1960s with the traditional repertoire and the context of their daily struggles. Violin, guitar and voices match together to produce melancholic and intense songs – the stirring tone of grief expressed by these resistants.

The band went to Singapore to record Cambodian Liberation Songs, the only record of the “Khmer People’s National Liberation Front”. 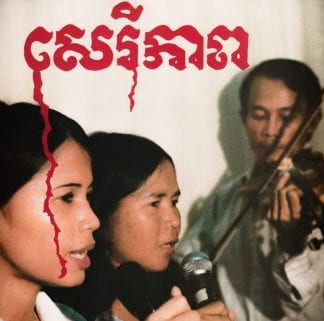