One of the great projects in Egyptian jazz, the Cairo Free Jazz Ensemble was formed by Salah Ragab and Hartmut Geerken as an avant-garde offshoot of the Cairo Jazz Band – the first jazz big band in the country – formed in 1968 when Ragab was appointed chief of Egypt’s Military Department of Music and had at his disposal a vast staff of musicians (almost three thousand!), an entire military building, and a full range collection of musical instruments. When encountering this recording, issued in 1970, the deep resonance found between the ensemble and its American counterparts becomes startlingly clear. Heliopolis is a stunning blend of big band spiritual jazz, the music of the Middle East, and the fire and energy of free jazz, unveiling a deep creative resonance with the contemporaneous efforts of Pharoah Sanders, Phil Cohran, and – of course – Sun Ra, combining jazz instrumentation and musical style with indigenous melodies and instruments to create a musical object with few parallels. The album is a throbbing, squealing, wild journey through the creative heights of sound channeling swirling, focused artistry that taps future and past in a single blow.

Copies of the original pressing are between the rarest and most sought-after records in canon of recorded jazz. This is the first ever authorized repress released under license from Hartmut Geerken. 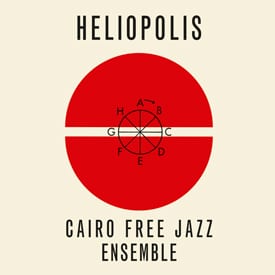 You're viewing: Cairo Free Jazz Ensemble / HELIOPOLIS 18,00€
Add to cart
Manage Cookie Consent
To provide the best experiences, we use technologies like cookies to store and/or access device information. Consenting to these technologies will allow us to process data such as browsing behavior or unique IDs on this site. Not consenting or withdrawing consent, may adversely affect certain features and functions.
Manage options Manage services Manage vendors Read more about these purposes
View preferences
{title} {title} {title}