Canedicoda is an artist, designer, performer, garment and furniture maker, silk-screen printer, and independent organizer. The project Adagio con buccia unfolds from an intuition on the performative potential residing in the act of making an object, in particular tailoring clothings on mindful bodies. Canedicoda sets up his nomad studio-atelier, and opens its doors only by appointment: he meets his guests, talks with them, (co)designs, and executes. A one-to-one performance for a spectator at a time. Conceived as halfway between a journal recording a long-lasting performance and an inventory, this book documents each phase of the project, collects pictures of the 100 actual garments, as well as feedbacks sent by the participants. Adagio con buccia reveals the slow pace of a practice beyond categorization and the unique, “quasi-alchemical” methodology of one of the most eclectic artists of his generation. 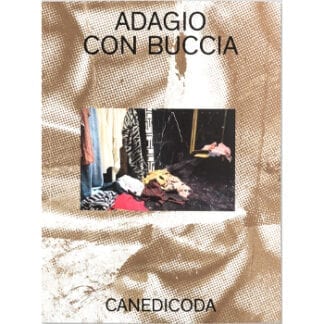 You're viewing: Canedicoda – Adagio con buccia 15,00€
Add to cart
Manage Cookie Consent
To provide the best experiences, we use technologies like cookies to store and/or access device information. Consenting to these technologies will allow us to process data such as browsing behavior or unique IDs on this site. Not consenting or withdrawing consent, may adversely affect certain features and functions.
Manage options Manage services Manage vendors Read more about these purposes
View preferences
{title} {title} {title}