Cinema was an experimental and avant-garde work released in early 1985. In many ways it was a representative of the new Brazil that was reborn after 21 years of darkness of the Military Dictatorship. Musically, it was a pioneering album in Brazilian music mixing acoustic and synthetic sounds.

One of the people in charge was the musician, composer, poet, writer, scriptwriter and speaker from Rio de Janeiro Ronaldo Tapajós, who was always involved with experimental and avant-garde music. His trajectory begins in the mythical 1968, when, as part of the the duo Rô and Carlinhos, he released an emblematic single containing the song “O Gigante” – perhaps the first Brazilian bad trip recorded on vinyl and a shrewd criticism of the society’s “square” habits.
Cinema was an experimental and avant-garde piece released in early 1985. In many ways it’s an example of the new Brazil that was reborning after 21 years of darkness under Military Dictatorship. Musically, it was a pioneer album for Brazilian music, mixing acoustic and synthetic sounds.
This rare adventure in Brazilian music was released independently in 1985, financed by the artists themselves. The original small press sold-out, belonging now to record collectors around the planet. For the first time Cinema is re-released on vinyl, with two extra and unreleased tracks found after decades.
Remastered from the original tapes, this reissue includes reproduction of the original graphic art, new testimonials from the four members of the project and a long article signed by Bento Araujo, author of the book series Lindo Sonho Delirante, which investigates audacious and fearless music created in the Brazilian underground.
According to Cinema’s LP press release: “in the era of visual music, Cinema is sound”. In terms of sound, listening to this album feels like diving into an intriguing anguish of trying to understand how the relationship between technology available at that time (1983-1984) and the more organic instruments happened, this duality between synthesizers/effects with percussion, woodwind instruments, piano and clarinet. In other words: how was the coexistence between the synthetic and the acoustic? This paradox seems to seduce collectors, DJs and enthusiasts of Brazilian music from the 80’s around the world.
This fictional soundtrack has a dark mood, as if a fog of dark and ambient music insisted on staying on top of cheerful patterns of Afro-Brazilian percussion, or conceptual synth pop. 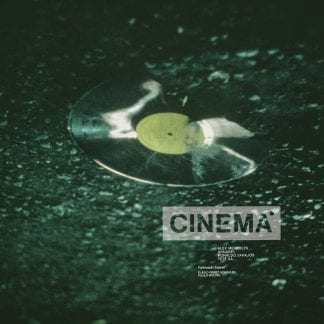