Spittle Records present a reissue of Comix’s self-titled album, originally released in 1981. One of the most treasured French minimal wave records is back on vinyl. Comix, a duo of guitarist/composer André Demay and DJ/singer Natan Hercberg, are a one album project. Their first single “Touche Pas Mon Sexe”, recorded in 1979, has been refused by several record companies, but duo finally found home on French branch of Virgin. They released two singles and one full-length LP in 1981, and appeared on the compilation BIPPP: French Synth-Wave 1979/85 (BORNBAD 002LP, 2012) a few decades later. The music was composed by André with a legendary Roland TR-808 (Marvin Gaye, Kraftwerk, and Afrika Bambaataa used the same drum machine for their hits at the same time). Natan wrote the lyrics, filling comic speech bubbles. Their production was somewhat different to mainstream “nouvelle vague” artists: much more positive and ironic than their chart mates. However, Comix didn’t have much success with their songs in ’80s, but they were rediscovered in 21st century with the strong resurging interest in original minimal wave/cold wave artists. Here they are again, young and bold, as nearly 40 years ago. Includes CD.

Be the first to review “Comix ‎– Comix” Cancel reply 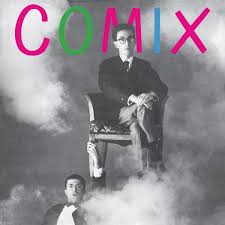