Grubbs and Unami are fully in third-mind territory after their touted 2018 debut, Failed Celestial Creatures. From pindrop twin-guitar focus to Grubbs’s piano maneuvering in Unami’s electroacoustic forcefields, to unclassifiable throbs, ceiling fans, and the exultation of the crowd at the NYC marathon, Comet Meta casts a gorgeous avant spell.

“‘Comet Meta’ grew out of concerts in Seoul, Hong Kong and Tokyo, with ground broken for this recording on a plane 35,000 feet above the East China Sea and in a tiny Risograph studio in Tokyo where they had to be extremely quiet.

Those familiar with Grubbs’ and Unami’s extensive discographies know them as folks who like to think and to make on their feet and on the run, with situation and surroundings profoundly generative.

The sound world of ‘Comet Meta’ ranges from pindrop twin-guitar focus (‘Comet Meta’ and ‘Nothing Left to Hear but the Night’) and Grubbs’ piano manoeuvring in Unami’s electroacoustic forcefields (‘Mirror Auction at Echo Décor’ and the horror homage ‘Walking Corpse in an Old House’) to unclassifiable throbs, ceiling fans and the distant exultation of the crowd at the New York City marathon.

Taku Unami’s work is influenced by science fiction, supernatural horror and weird fiction. He’s the composer of film scores for directors including Isao Okishima and Takeshi Furusawa, is one-third of the group Hontatedori and has collaborated with, among others, Annette Krebs, Radu Malfatti, Jean-Luc Guionnet, Jarrod Fowler, Toshiya Tsunoda and Graham Lambkin.

David Grubbs has played in Gastr del Sol, the Red Krayola and Squirrel Bait and performed with Tony Conrad, Susan Howe, Pauline Oliveros, Will Oldham and many others. He’s the author of the books ‘The Voice in the Headphones’, ‘Now that the audience is assembled’ and ‘Records Ruin the Landscape’.” 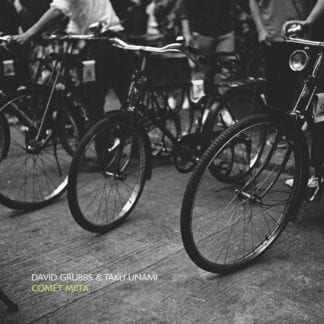