Davide Tidoni / WHERE DO YOU DRAW THE LINE BETWEEN ART AND POLITICS?

Where Do You Draw the Line Between Art and Politics? consiste in una serie di interviste a persone che sono state attive a vario titolo nell’intersezione tra arte e politica.

Where Do You Draw the Line Between Art and Politics? consists of a series of interviews with individuals who have been active in various capacities at the intersection of art and politics.

Between historical documentation, political memory, dialogic reflections, and motivational support, the publication focuses on the experiences, commitments, and feelings that animate and inform aesthetic priorities in social spaces both within and outside of art institutions; a repository designed to inspire and encourage the politicization of aesthetics, as opposed to the aestheticization of politics.

The people interviewed are: Pietro Perotti, a Fiat worker and self-appointed worker communicator; Lucia Farinati, a researcher, activist and independent curator; two anonymous members of a hacker collective working in the field of technology and urban space; Errico Canta Male, a singer-songwriter; and Mario “Schizzo” Frisetti and Luca Bruno, of the Torino Squatters. 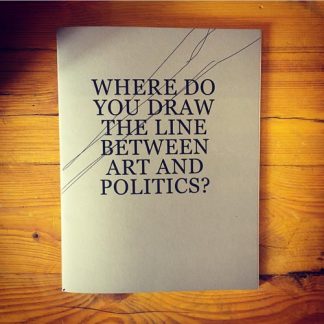 You're viewing: Davide Tidoni / WHERE DO YOU DRAW THE LINE BETWEEN ART AND POLITICS? 15,00€
Add to cart
Manage Cookie Consent
To provide the best experiences, we use technologies like cookies to store and/or access device information. Consenting to these technologies will allow us to process data such as browsing behavior or unique IDs on this site. Not consenting or withdrawing consent, may adversely affect certain features and functions.
Manage options Manage services Manage vendors Read more about these purposes
View preferences
{title} {title} {title}