Force Majeure is an uplifting suite of real, soulful comfort music – an album that cathartically encapsulates an all-too-familiar human experience of 2020. Featuring 11 pieces performed by bassist Dezron Douglas & harpist Brandee Younger across a series of live-streamed shows from their living room in Harlem, NY, the album was self-recorded by the duo using just a single microphone.

The same day Governor Andrew Cuomo shut down “non-essential” businesses throughout the state of New York, Douglas & Younger set up a window to the world that would prevail as a weekly musical reprieve over the devastating weeks and months to come. As the early effects of covid-19 plagued the citizens of New York City, Douglas & Younger did as we were all ordered to do — shelter-in-place. From their apartment in Harlem, their reflex as players and community-builders was immediate. Broadcasting via social media and spreading the word to friends and family, the duo hosted “Force Majeure: Brunch in the Crib with Brandee & Dezron,” a Friday morning live stream where they performed songs, said “hi” to friends tuning in, and passed a digital tip jar. The name “force majeure” — known to diligent contract-readers as a seldom-invoked bit of legalese that voids commitments in event of “extraordinary circumstances” — was, for Douglas & Younger, a reference to the sudden loss of livelihood that they and their musician peers suffered in the wake of covid-19.

“We vowed to become a part of the resiliency of this city,” says Douglas. “You can take the work away, but you can’t stop musicians from being creative. Live streaming is just a part of it. The world as a whole saw that arts & entertainment is an integral and vital part of this ‘service’ city. We, musicians and creatives, are as essential to this city as the MTA is. The NYC community responded with love and honesty on a high level. Expression became vital for people to make it through the day and, at the same time, listening and watching expression became vital.”

The success of Douglas & Younger’s initial live streams turned their series into an ongoing weekly ritual for a fast-growing audience of supporters. For most, it was a momentary musical break that helped ease the stressful weeks of lockdown, even as the weeks turned into months and the re-opening date extended further and further into the future. In late May, as the country erupted over the compounded murders of Ahmaud Arbery, Breonna Taylor, George Floyd, and countless other Black Americans, Douglas & Younger continued to connect from their Friday morning platform, uniting with more and more people through the healing power of playing, sharing, and listening. The series got attention from NPR, The Wall Street Journal, Boiler Room, Downbeat, and others; but regardless, finding the creative energy to devote to the project was a regular challenge for the two musicians. “Sometimes it was hard to be creative because the mood in the world was so dark, but every Friday we felt compelled to give back and allow GOD to heal through vibration,” says Douglas. Not only was the human connection vital, the duo felt a responsibility as stewards of music’s future. “Whatever the next thing is, I will make it a point to be involved because Music saved my life, saves lives, and must be taken care of.”

The repertoire that Douglas & Younger performed began with standards they knew and music they wanted to learn (or “get inside of,” as Douglas often said), but evolved on a week-to-week basis to incorporate shifting emotions, milestones, and special requests from friends and family. Younger recalls: “In choosing the repertoire we played, it was definitely more organic and personal. When we realized a birthday of a certain artist or holiday was coming, we’d do something in dedication… Sometimes we’d pick the rep based on our mood. On those very dark days that Dez mentioned, we’d play “Sing” to perk up the mood. Something about that song just brings smiles all around. It was very hard to fake when the mood was dark, though. Marvin Gaye helped us out a lot during that time, as did some spirituals.” With what became their brunch staples they covered a broad range of memories and sounds, including classics by The Stylistics, The Jackson 5, Alice & John Coltrane, Pharoah Sanders, Kate Bush, Sting, and The Carpenters, as well as a co-written original composition with which they ended every set, “Toilet Paper Romance.”

From the earliest sessions, the duo worked alongside International Anthem to review the weekly recordings; together they compiled, edited, and eventually arrived at the stream-to-songbook of Force Majeure. Between the choicest takes of tunes chosen for the final album sequence, they put excerpts of their sometimes cute or comedic, often profound banter. Notably Douglas’s voice ends both side A and side B with off-the-cuff variations of: “Black Music cannot be replicated, it can only be expressed.” Like poetic bookends for Force Majeure, his words could also serve as foundational principles for the work, underscoring the importance of authenticity and integrity in music.

Douglas elaborates: “Black Music, no matter what genre, is exactly what it is — Music created by Black Musicians for the sake of vibrating on our own frequencies of understanding and empathy. I love all music, but I also recognize that music is a cultural and regional vibration. You don’t have to be Black to play Black music, but if you are out here making money off of Black Culture and have no empathy for the People and the Culture then you are even more part of the problem. Black Lives Matter because for a long time our lives didn’t matter and it was Normal — normal to society and normal to us as Black humans. What’s different between then and now is the fact that the Virus has given people time to focus on the current social media platform used to document evil in this world. The filming and documentation of the loss of human life to evil is more powerful than Politics and Government. It’s LIFE showing us how Inhumane we are as a Human Race. Yet we still haven’t figured it out yet. Let’s hope we aren’t the catalyst for this planet to implode. That would be unfortunate considering we have the chance to fix it. We have the chance to do right by Mother Nature and we have the chance to do right by each other. We always have a chance. Change is inevitable, but is evil and selfishness and self-righteousness a part of change? Certainly! Is Love and Empathy and Humanity a part of change? Most definitely! What side are you on? We are on the side of Love.”

Douglas & Younger understand that the revolution begins with a transformation of the heart. And for the heart to be transformed, it must be lifted up. “This album is a testament to the power of music to uplift us through the most challenging times,” says friend, collaborator, and fellow International Anthem recording artist, Makaya McCraven. Force Majeure is an uplifting suite of real, soulful comfort music – a spiritual salve, emanating warmth from the hearth of a Harlem sanctuary.

Bassist, composer, bandleader, and educator Dezron Douglas has established himself as a major force in contemporary creative music. A protégé of the great Jackie McLean, the Downbeat Magazine 2019 Rising Star is known for his work with Pharoah Sanders, Ravi Coltrane, Cyrus Chestnut, David Murray, Louis Hayes, and also with piano legends George Cables, Eric Reed, Mulgrew Miller and Benny Green. Douglas has recorded on more than 100 albums, contributing to the artistry of numerous bandleaders and maintaining an integral presence in the sounds of his peers, which include Keyon Harrold, Jonathan Blake, Melanie Charles, and Makaya McCraven. He is an active music educator, currently on the Jazz Studies faculty at NYU Steinhardt. He has released 6 albums as a lead artist and maintains a variety of projects that he uses as platforms for his compositions. His band, Black Lion, released their latest single “COBRA” in October of 2020.

Harpist, composer, educator, and concert curator Brandee Younger is known for her work with Ravi Coltrane, Moses Sumney, Lauryn Hill and producer Salaam Remi. The New Yorker has described her instrumental craft as “radiant playing … as cogent on hip-hop and R&B albums as it is set against classical and jazz backdrops.” Her work often extends to illustrious heights, featured by Beyoncé in Netflix’s concert documentary Beyoncé: Homecoming as well as Quincy Jones and Steve McQueen in 2019’s “Soundtrack of America” series. She recently joined the harp faculty at NYU Steinhardt and the New School in Manhattan. When Alice Coltrane passed away in 2007, her son Ravi Coltrane asked Younger to perform at the memorial. Her performance “moved me and everyone in attendance from the first glissando,” Coltrane told the New York Times. “No harpist thus far has been more capable of combining all of the modern harp traditions — from Salzedo, through Dorothy Ashby, through Alice Coltrane — with such strength, grace and commitment.” Younger recently signed to Impulse! Records, with whom she has a new album planned for release in 2021.

Douglas & Younger are long-time companions in life and in music. The two East Coast natives met early in life and have accompanied each other, personally and professionally, through equally prolific careers. “Brandee and I met in college, University of Hartford, Hartt School of Music, back in 2001,” remembers Douglas. “Her practice room was across the hall from mine. We began a friendship instantly through music and Black culture. We would jam a lot in college when she wanted to practice ‘Jazz.’ She was a Classical Harp and Music Business double major and she was heavily influenced by Jazz and Black Music so I sort of became an outlet for her to walk on the wild side in the eyes of University and Classical politics.” To this day, Douglas and Younger often accompany each other in the ensembles they lead, respectively. The two have played together in the Ravi Coltrane Quartet, with The Baylor Project, and in sessions for Makaya McCraven’s 2018 release Universal Beings, on which they are both featured artists. Force Majeure is their first release as a duo. 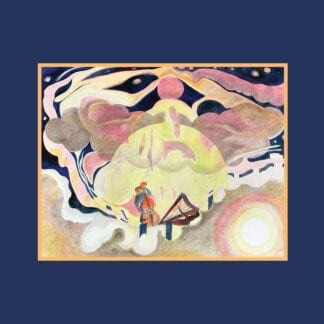