DISCO – An Encyclopedic guide to Cover Art of Disco records

This large-format deluxe hardback book features the amazing artwork of thousands of disco record cover designs from the 1970s up to the mid-1980s.

Together, the record cover designs gathered here create a unique visual history of disco culture. Featuring more than 2,000 album cover designs (including hundreds of full-size covers) as well as over 350 12-inch sleeves, this book is truly an encyclopedic document of disco music and the industry and culture attending it.

In addition to the visual documents from the era, the book includes interviews with a number of important disco figures such as Mel Cheren (West End Records), Henry Stone (TK Records), Ken Cayre (Salsoul), Marvin Schlachter (Prelude) and others, as well as histories, biographies and discographies of all the major disco record companies, plus sections on roller disco sleeves, disco instruction albums, 12-inch sleeves and a scrapbook of disco ads.

This is the latest volume in Soul Jazz’s deluxe series of books featuring full-size reproductions of record cover art designs. It is presented by Disco Patrick and Patrick Vogt, editors of the book Disco Patrick Presents: The Bootleg Guide to Disco Acetates, Funk, Rap and Disco Medleys. 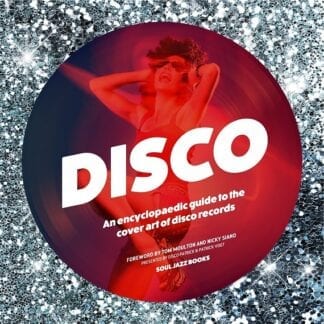 You're viewing: DISCO – An Encyclopedic guide to Cover Art of Disco records 45,00€
Add to cart
This website uses cookies to improve your experience. We'll assume you're ok with this, but you can opt-out if you wish.Accept Read More
Privacy & Cookies Policy
Necessary Always Enabled