David Edren confirms himself as a cosmic courier and wizard of synths with the organic electronic music included in Venndiagram. Released for the first time on LP, it appeared only on tape in 2013. The sound remains a pure balance between vibrating oscillations, modular frequencies and rhythmic pulsations, but the general imaginary changes. The main theme is the intersection of circular and geometric shapes and the minimal and clear notion which they represent. Edren imagines reverberated coordinates of galactic sines and cosines, interprets sounds and distortions as trajectories, melodic patterns like pyramidal plastic interpenetrations. All is lead by a primitive impulse to the combination of lines, shapes, figures, ropes or tangents, diameters, squares or triangles. Along these inter-zonal paths, he forges rare atmospheres full of enveloping spherical and spiraling sounds, luminous and radiant in their hypnotic aura, or magnificently ecstatic and ascensional. It’s much more than math or geometry, but an alternative visionary way to conceive the world (maximal and minimal) in other manifestations of space and time. 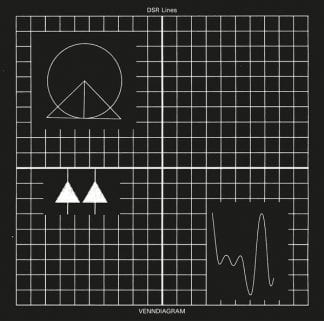 You're viewing: DSR Lines / VENNDIAGRAM 20,00€
Add to cart
Manage Cookie Consent
To provide the best experiences, we use technologies like cookies to store and/or access device information. Consenting to these technologies will allow us to process data such as browsing behavior or unique IDs on this site. Not consenting or withdrawing consent, may adversely affect certain features and functions.
Manage options Manage services Manage vendors Read more about these purposes
View preferences
{title} {title} {title}