Elisabeth Waldo’s Maracatú, originally released in 1959, is a rare and early gesture of hybridic musical multiculturalism that has remained sinfully overlooked through the decades. Occupying a similar territory to now widely celebrated, roughly concurrent albums like Eden Ahbez’s Eden’s Island and Chaino’s ‎Jungle Echoes, Pleasure For Music’s reissue turns history on its head, offering a rare opportunity for a visionary and forward-thinking body of work to receive its rightful due.

Elisabeth Waldo is a fascinating, little known figure in mid 20th century music. Born and raised within a musical family in the state of Washington, she was briefly the first violinist with the Los Angeles Philharmonic, before moving to Mexico City and becoming deeply invested in the study of pre-Columbian music and instruments, leading to extensive work as an ethnomusicologist. At the suggestion of Diego Rivera, with whom she formed a friendship based on a shared interest in these sounds, she developed her own system of hieroglyphic musical notation for working with pre-Columbian instruments, designed to teach others how to play them. It is this deep investment and study of Latin American music – ancient and contemporary – that lays at the foundation of Maracatú, her debut LP, released in 1959. 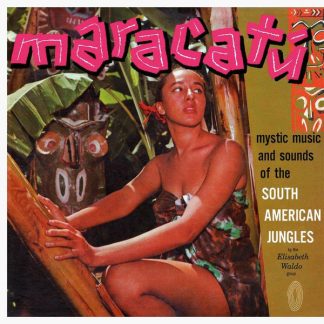