Following on from 2018’s Tape 1 & Tape 2, Dutch producer and musician Eelco Topper returns to Soundway Records for the next two instalments of his Felbm project. As before these will be released as two separate digital EPs and then together on one vinyl LP.

Tape 3 & Tape 4 is an intimate, emotional, lilting and melodic solo project with a restorative, therapeutic nature. They were composed and recorded by Topper with just those aspects in mind as a personal remedy for the ailments of modern life. With a breezy and soothing quality these fourteen lo-fi, instrumental, jazz-infused sketches written on guitar, with cascading keyboards, vibraphone and drum machine, seem perfect for the second half of 2020, a year in which we could all surely use some curative and uncomplicated music. With echoes of the dreamier end of 1980s English indie-pop, minimal ambient music and Brazilian bossa-nova, Topper’s musical storybook includes touches of The Durutti Column, echoes of Ethiopian Tezeta, hints of Antônio Carlos Jobim and Baden Powell, whilst all set firmly in the summer fields of Germany and the Netherlands.

In Topper’s own words: “most of the compositions on Tape 3 originated at home, with a small and basic setup of a keyboard, a guitar, a rhythm box and some small instruments lying around the tape deck. Inspiration came from the emptiness after a stranded relationship, finding balance, peace and strength within yourself again. Somehow I feel some optimism can be found in these songs that perhaps reflects how I experienced this process.”

“In the summer of 2019 I took only a guitar and a “pocket piano” to a holiday retreat in rural mid-Germany that I visit regularly, and wrote most of the basic ideas for Tape 4. The opening track Brunnengasse features the wind chimes from the garden there. When I hear them I’m back at that peaceful place immediately. Dealing with chronic fatigue syndrome for the past few years, I took on a habit of hiking in nature frequently, which in turn led to a budding love of birdwatching. The track Beaufort contains a field recording taken in an area where I like to go hiking and spotting birds. Most notably you can hear the song of a woodlark, a bird far easier heard than seen.”

The recording method used for the creation and recording of Tape 3 and Tape 4 is merely the same as it was for Tape 1 and Tape 2: all sketches were initially recorded onto cassette on a 4-track tape machine. The four-track sketches this time were arranged to include some extra parts and instruments than used on Tape 1 and Tape 2. Most notably a vibraphone found its way onto almost every track fitting Topper’s sound-palette perfectly: warm yet distinctive, a percussive as well as sustaining sound that evokes some melancholy and a certain timeless nostalgia. Features that most certainly also apply to the other ‘new’ instrument on the tapes: mellotron flutes.

Topper considered asking his ‘Felbm Five’ band members to play on the recordings, but somehow ended up playing all instruments himself again, accepting and embracing the limitations of his playing. “I find it enjoyable to play, record and shape these small and personal songs all by myself, even though they would definitely perform it better.”

Style-wise these tracks are still navigating the space between quiet, open, meditative tunes and more solid instrumental songs, thereby reflecting his constant search for an optimal balance between stillness and movement. 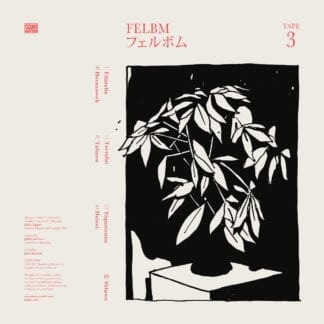