Sardinian hinterland is something else in comparison to the idyllic postcards of the high bathing season. It is something else also from what you see in the folklore documentaries about the Sardinian traditional masks.
The land is bleak, made of stones and basaltic boulders, the landscape is fractured, broke up. Cities like Macomer, where HBoL lives, are agglomerations of concrete barracks, rough roads, closed factories, industrial and commercial decadence. Only local traditions, the ones that are too obscure and uneasy to tell, resist in the villages that rise in
the surrounding hills, within the woods where evidence of civilizations that date 5.000 years ago.
“Sex and Dead Cities” is a reflection, a meditation, a testimony of an area left to itself to rust, where living it’s difficult if not unbearable. Surviving becomes a necessity, through the deafening flame of the ancestral rites, which forged the story of those rocks which the hills are made of, that now remain half-buried. Rites manifested through obsessive repetition and daze, in the attempt to elevate to a higher dimension.
Five tracks full of industrial reminiscences, feral screams and psychotropic paranoia. 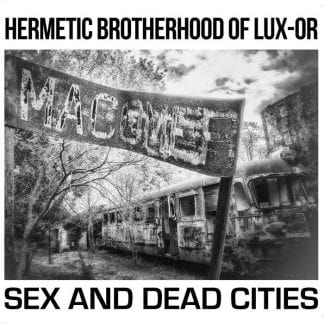 You're viewing: Hermetic Brotherhood of Lux​-​Or – Sex and Dead Cities 18,00€
Add to cart
This website uses cookies to improve your experience. We'll assume you're ok with this, but you can opt-out if you wish.Accept Read More
Privacy & Cookies Policy
Necessary Always Enabled