Ruthless Sperm. What’s in a name? A whole hell of a lot, actually. Sperm can ruin everything. Persistent little shits that fight their way to the prize. If just one soldier gets ahold of its egg of choice, things will break apart, bubble and mutate. A microscopic violence that leads to thirty plus pounds of sludge and flesh. Still, beauty tends to be the outcome after all this splashy mess and most parties find a happy, rewarding ending. Most parties. To the unfortunate others, the outcome can be more terrifying than anything dreamed up in a Polanski flick.

taly’s His Electro Blue Voice follows a similar path to creation. Once the choice is made, it’s guaranteed the trip will be violent and unrelenting. Only the band doesn’t tell you up front which crooked path is gonna lead you to the finish line (at first, they may not even know). But whether it’s slathered in a thick glaze of neo-gothic guitar, an unexpected electronic pulse or leveled under a death trip full of panic inducing terror shrieks, His Electro Blue Voice have become masters at building soundscapes that leave brave listeners spent, soiled and with nothing positive on their mind.

On Ruthless Sperm – His Electro Blue Voice’s debut full-length, after a string of collectible singles/EPs and an appearance on the Sub Pop 1000 compilation – they set their trajectories on a Kraut-driven rhythm; a haunting, cinematic wash or a mechanically-sound industrial thump. Thirty-plus minutes of shock-horror blasts, blaring cyber-synth attacks and that gloriously-repetitive Stoogeoid-meets-Killing Joke throb. The end result is a platter that’s as direct as it is deadly. Yet for all the bombast and bummer, His Electro Blue Voice still bring forth euphoric hooks and shards of shoegaze, if only to leave them strewn about within the mechanical wreckage. You can almost hear the sounds of the early 4AD roster in the grooves, left teetering between warped indie sensibility and creepy-crawl madness. Crazy sounding, but damned if it doesn’t stick in your head.

Ruthless Sperm by His Electro Blue Voice: subtle as a construction site and precise like a leather gloved killer. This is the apocalypse. This is end times. Thankfully we get a decent soundtrack to go with it.
credits 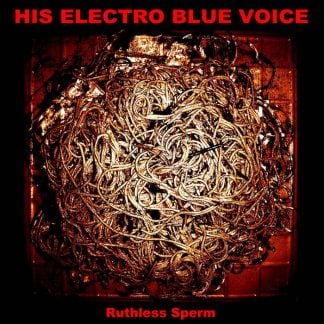