Horace Tapscott With The Pan-Afrikan People’s Arkestra – Live At I.U.C.C.

Available on vinyl for the first time in 40 years, Outernational Sounds presents a crucial document from the Los Angeles jazz underground. Live At I.U.C.C. sees the Pan-Afrikan Peoples Arkestra at their most together, stretching out on home turf in 1979, with the legendary Horace Tapscott at the helm. Tapscott is one of the unsung giants of jazz; a gifted composer and arranger, a boldly original pianist, and above all a visionary bandleader, Tapscott’s recorded footprint is small, but his legacy continues to vibrate through the Los Angeles music underground. From Freestyle Fellowship to Build An Ark, Kamasi Washington, and Dwight Trible, it all traces back to Tapscott. The pianist was an organizer, and instead of chasing a successful recording career, he wanted to build a community band that would act as ‘a cultural safe house for the music.’ ‘I wanted to say, “This is your music. This is black music, and I want to present a panorama of the whole thing right here”‘ said Tapscott in the late 1990s. As a culturally radical, communal big band with a visionary approach to American Black music, Tapscott’s Pan-Afrikan Peoples Arkestra is second only to the other famous Arkestra, that of Sun Ra. Tapscott founded the group in 1961 as the Underground Musicians Association (UGMA). It changed its name to the Pan African Peoples Arkestra in 1971, and through the seventies the players lived, played, and worked together. Community work and political consciousness were at the heart of the project; for two decades they played in streets, parks, and coffee houses. From 1973 to 1981 their main rehearsal and concert space was the Immanuel United Church of Christ (I.U.C.C.); the Arkestra played every second Sunday, developing their sound and hipping new audiences to their vision. Live At I.U.C.C., recorded in early 1979, was the only live recording the band released. In full flow, and at the height of their powers, the group features original UGMA members Linda Hill, David Bryant, and Alan Hines, alongside a new generation including Jesse Sharps, Sabir Mateen, and Adele Sebastian. Showcasing spiritualized classics from the Arkestra’s songbook, including the heavy modal groovers “Desert Fairy Princess” and “Macrame.” Live At I.U.C.C. is a rare chance to hear one of the most important, foundational bands in the music. With Tapscott at the piano, this is the rarely-captured sound of the mothership in full flight! Limited, vinyl-only triple LP, 180g pressing by Pallas. Fully licensed from Nimbus West founder Tom Albach.

Be the first to review “Horace Tapscott With The Pan-Afrikan People’s Arkestra – Live At I.U.C.C.” Cancel reply 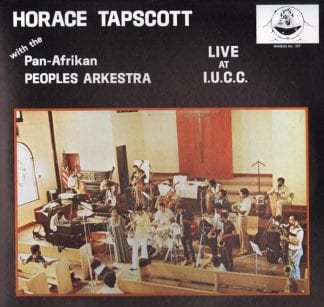 You're viewing: Horace Tapscott With The Pan-Afrikan People’s Arkestra – Live At I.U.C.C. 35,00€
Add to cart
This website uses cookies to improve your experience. We'll assume you're ok with this, but you can opt-out if you wish.Accept Read More
Privacy & Cookies Policy
Necessary Always Enabled