Much needed repress, in process of stocking. Edition of 500. Aguirre Records present a reissue of Infinite Sound’s Contemporary African-Amerikan Music. This is conscious free jazz featuring Roland P. Young, originally released in 1975 on the eclectic 1750 Arch records. “‘1750 Arch was a beautiful Spanish-style hacienda,’recalls Young.’ It had a recording studio in the basement and the salon was a performance.’Young played solo gigs there and also in duo with cellist Chris Chaffe. He remembers it as a particularly ‘transcendent’ setting for concerts by this trio, with singer Aisha Kahlil and bassist Glenn Howell. ‘What appeared to be ‘experimental’ was reaching for sounds and emotions that were unfamiliar. We performed at rallies in support of various causes; our ultimate goal was a blending of cultures.’ In 1968, Young was working as a DJ at KSAN, an underground rock station in San Francisco. ‘Glenn used to call me when I was on air to comment about the music I was playing; he was a musician and I invited him to come talk about music, then decided to play. The pair met Kahlil at one of their concerts. ‘A mutual friend introduced her and told us she was a good vocalist, loved our music and wanted to sing with us. We invited her to a rehearsal and soon after invited her to join the group. Infinite Sound came together easily; we had a shared intuition, and created a lot of music. Each of us would bring ideas to rehearsals and we would work on them. We talked about how to present our material and how compositions would flow; we were also conscious of how we dressed for performances, how we moved on stage, how we interacted with each other and the audience. On occasion we would invite dancers to perform with us, friends of Aisha.’ 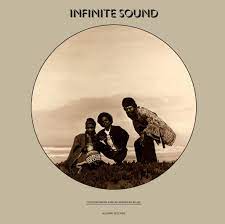 You're viewing: Infinite Sound / CONTEMPORARY AFRICAN-AMERIKAN MUSIC 25,00€
Add to cart
Manage Cookie Consent
To provide the best experiences, we use technologies like cookies to store and/or access device information. Consenting to these technologies will allow us to process data such as browsing behavior or unique IDs on this site. Not consenting or withdrawing consent, may adversely affect certain features and functions.
Manage options Manage services Manage vendors Read more about these purposes
View preferences
{title} {title} {title}