Irmin Schmidt – All Gates Open: The Story of Can

All Gates Open: The Story of Can is a book about the German experimental rock band Can, written by British writer and editor Rob Young and Can founding member Irmin Schmidt. It was published in May 2018 in the United Kingdom by Faber and Faber.

Book One is a biography of Can. Using interviews with Can’s members and people associated the band, Young traces the history of the band from their formation in 1967 in Cologne, Germany by Schmidt with Holger Czukay, Michael Karoli and Jaki Liebezeit, to their split in 1979. He covers their work, from their studio albums and live performances, to their film soundtracks and their “Ethnological Forgery Series” world music. Young also explains the role they played in the development of Krautrock and the influence they had on other musicians. The effect post-war Germany had on its youth and the resulting music scenes that developed in the 1950s and 60s is also investigated,.

Book Two is a collection of documents collated by Schmidt. It contains an oral history of Can assembled by Electronic Beats editor Max Dax and writer/producer Robert Defcon, and interviews by Schmidt with other musicians, artists and filmmakers. The interviews, which include The Fall’s Mark E. Smith, Bobby Gillespie of Primal Scream and German filmmaker Wim Wenders, were cut up and reassembled as a roundtable discussion. Also incorporated in the book are extracts from Schmidt’s notebooks and journals from 2013 to 2014, which include dream fragments and his memories of Germany immediately after World War II.

Be the first to review “Irmin Schmidt – All Gates Open: The Story of Can” Cancel reply
Records
Books/DVD 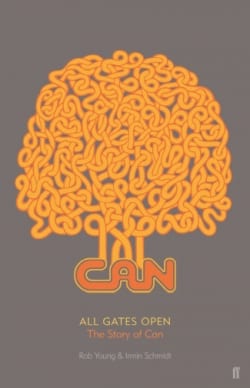 You're viewing: Irmin Schmidt – All Gates Open: The Story of Can 30,00€
Add to cart
This website uses cookies to improve your experience. We'll assume you're ok with this, but you can opt-out if you wish.Accept Read More
Privacy & Cookies Policy
Necessary Always Enabled