The debut release by Slovenian musical polymath Iztok Koren, best known for his work in avantefolk outfits Širom, Škm banda and Hexenbrutal. Made in the heat of 2020’s lockdown, Iztok transmutes the intensity of the period into 6 pieces that sensitively unfurl over time. With various stringed instruments and field recordings in hand, he weaves his interests in Slovenian mysticism, ancient Chinese divination texts, his family and his new found love of nature, revealing an intimate snapshot of life up-close.

Prekmurje is a remote flatland in the heart of central eastern Europe.
It has been inhabited by several different ethnic and cultural groups during centuries.
Before the WW II it used to have a significant Jewish and Romani communities that, together with the Hungarian and Slavian native ones developed some peculiar cultural interchanges.
In the modern political geography, Prekmurje (literally over the Mura, an important river of the region), is an area that basically is divided from the rest of the state because of the river, and on the other sides bordering other Countries.
The rural vocation of the land and of the locals, kept this place in a suspended time, placing the music tradition as an important brick to maintain the folk wisdom and the experimentation in an almost profane and alchemic balance.
Iztok Koren (1/3 of Širom) debut album is a witness of this land ancestral echoes and it’s the evidence of how personal experiences build the life we live and music can be how we live and we share those experiences.
credits 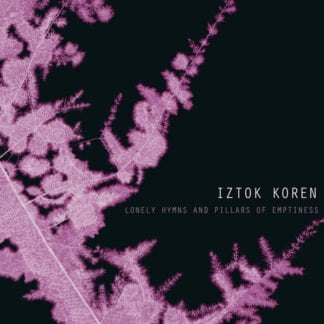 You're viewing: Iztok Koren / LONELY HYMNS AND PILLARS OF EMPTINESS 12,00€
Add to cart
Manage Cookie Consent
To provide the best experiences, we use technologies like cookies to store and/or access device information. Consenting to these technologies will allow us to process data such as browsing behavior or unique IDs on this site. Not consenting or withdrawing consent, may adversely affect certain features and functions.
Manage options Manage services Manage vendors Read more about these purposes
View preferences
{title} {title} {title}