Symphonic Hollywood sounds on the stage of the Vienna Musikverein: the world-famous orchestra plays iconic themes from Star Wars, Harry Potter, Indiana Jones, Jurassic Park and other milestones in film history. Star guest Anne-Sophie Mutter performs violin arrangements made especially for her by Williams himself.

Star Wars, Harry Potter, Indiana Jones, Jurassic Park: the soundtracks of John Williams, the master of cinematic magic, are among the most popular in the history of film and have received numerous prestigious awards, including five Oscars, five Emmys, four Golden Globes and twenty-five Grammys. Now the legendary American film composer has recorded the most famous, beautiful and touching of his cult themes for the first time with the Vienna Philharmonic. “Star moments of film music” was the headline of the Wiener Zeitung: “Hollywood’s grandmaster and the Vienna Philharmonic thrilled audiences with excerpts from his life’s work.” 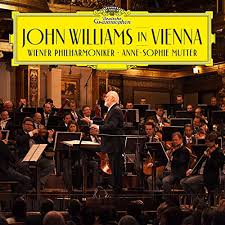 You're viewing: John Williams , Anne-Sophie Mutter, Wiener Philharmoniker ‎/ JOHN WILLIAMS IN VIENNA 35,00€
Add to cart
This website uses cookies to improve your experience. We'll assume you're ok with this, but you can opt-out if you wish.Accept Read More
Privacy & Cookies Policy