Now entering a half-decade, Emotional Rescue presents an album that took almost as long to release as the label has existed. Jorge Reyes’ collaborative album with Antonio Zepeda is a masterpiece and therefore, worthy of the time and effort to share.

From cult artist to becoming an essential musical discovery, Jorge Reyes is an example that no one discovered or owns the music beyond the writer and creator.

Growing up in Mexico’s 2nd City, he spent much of his life dedicated to travelling and learning music traditions and instruments. While at University to study Flute, he was involved in several influential bands of the era before going on to travel the world to further his learning, before returning to found the seminal Chac Mool group.

By the early 80s he went solo, exploring an increasing interest in the use of Prehispanic instruments mixed with electronics. In the opening songs, I-Cana and A La Izquiedra Del Colibri, the interplay between flute, guitar and vocals with TR-700, Poly 800 and DX7, all fuse his vision perfectly.

The additional contribution of Antonio Zepeda’s percussion creates a timeless mystique to the album, taking you on a journey deep in the mind of one of Mexico’s most important experimental artists.

Passing away at just 56, Jorge Reyes work was cut short, however he has left over a dozen albums to be explored. While critics increasingly question the valedictory of reissues, the premise on whether something should be heard is if it’s good. Therefore, let A La Izquierda Del Colibri be heard. 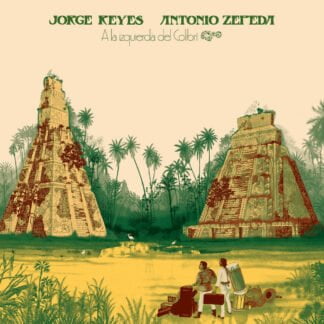 You're viewing: Jorge Reyes, Antonio Zepeda / A LA IZQUIERDA DEL COLIBRÍ 29,00€
Add to cart
Manage Cookie Consent
To provide the best experiences, we use technologies like cookies to store and/or access device information. Consenting to these technologies will allow us to process data such as browsing behavior or unique IDs on this site. Not consenting or withdrawing consent, may adversely affect certain features and functions.
Manage options Manage services Manage vendors Read more about these purposes
View preferences
{title} {title} {title}