Seattle-raised, Brooklyn-residing Kassa Overall is a jazz musician, emcee, singer, producer, and drummer. His second, full-length album, I THINK I’M GOOD, is the work of an artist whose voice has ripened to its own hard-earned, provocative conclusions, erasing the need to talk about dissolving barriers between hip hop and jazz because he has begun a new conversation.

I THINK I’M GOOD is a window into the real life of Overall, a Bushwick-based artist wrestling with the abhorrent American prison system, the ebbs and flows of romantic relationships, and perils of trust, all seen through the kaleidoscopic lens of a brilliant 21st century composer. The backdrop to these varied themes is Overall confronting his experience with mental illness, which included a manic episode and subsequent hospitalisation when he was a student. Themes of incarceration and claustrophobia weave through the record, but never drown out the feeling of a fragile but vital hope.

“Mental instability or hyper-sensitivity was something that felt too taboo to talk about,” said Overall. “I want to show the world that mentally sensitive people are the innovators of our society, and hopefully set a new standard that includes a healthy way of life and embracing our unique perspective on reality.”

Recent years have seen something of a worldwide movement making jazz and improvised music relevant to fresh audiences, providing a critical cultural counterpoint to feelings of political disenfranchisement and globalised anxiety. Exciting scenes are springing out of grassroots musical communities from London to Melbourne, Chicago to Johannesburg. But perhaps the most vital of these scenes remains in New York, a city that is still ground zero for the most competitive jazz musicians in the world, a community that continues unbroken from Charlie Parker to the present. This is Overall’s home turf, and it shows on I THINK I’M GOOD, which is a tour de force of New York’s brightest young up-and-comers (Joel Ross, Morgan Guerin, Julius Rodriguez, Melanie Charles, J Hoard) as well as some of its more established fixtures, including Sullivan Fortner, Brandee Younger, Theo Croker, Craig Taborn, Aaron Parks, and Vijay Iyer. Iyer’s contribution is a gorgeous, melancholic tribute to their shared musical mentor, Geri Allen, with whom Overall played for seven years. Dr. Angela Davis, a longtime jazz supporter and fan of Overall’s work, makes a recorded cameo, punctuating the album’s dive into the human condition and exploration of social justice.

Like Karriem Riggins before him, Overall belongs to a rare class of musicians naturally fluent in both jazz performance and hip-hop production. He’s also a clear contemporary of brazen, potent genre-shifters like Madlib, Flying Lotus, Solange, and Kendrick Lamar. Yet one of the most striking aspects of I THINK I’M GOOD is its singular intimacy, a byproduct of Overall’s indie hustle and uncanny at-home and on-the-fly production methods. In fact, most of the album happened out of Overall’s Bushwick bedroom and a backpack. “I’ve recently begun to think of myself as a backpack jazz producer, which is something like a cross between a jazz musician, a backpack rapper and a bedroom producer,” said Overall, who mostly used a skeletal mobile studio (laptop, a simple audio interface, and microphone), giving the album a distinctively inward, almost confidential flavour.

But Overall describes his method as being a far more social endeavour than bedroom production. “The bedroom producer is mostly solitary and stationary, but the backpack producer is collaborative, mobile, and totally improvisatory in the truest sense of our tradition. My studio is with me almost all the time. I need to be able to work whenever and wherever, at my own pace.”

As Time Out New York frames his talent, Overall is “a Renaissance man: part chopsy, super-funky jazz drummer, and part rising producer-MC.” Since the January 2019 release of Ice Cream, NYC and global audiences have had the opportunity to experience Overall’s singular brilliance, which has been embraced with rave reviews from The New York Times, AFROPUNK, Downbeat, NPR, BBC Radio 6 Music, and other influential media outlets. 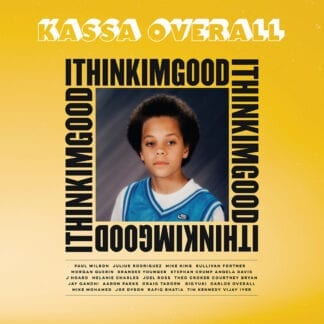