Having been auspiciously cued for a Valentine’s Day release, King Midas Sound’s ‘Solitude’ is a meditation on loss, an elegy to extinguished romance and love in the endtimes. Combining the confessional vulnerability of Roger Robinson’s lyrics / dreader-than-dread delivery with perhaps the most stripped back arrangements in Kevin Martin’s entire catalogue, the duo drill deep into emotional sufferation with simultaneously airless, deeply moving results, glacially limning a coming-to-terms with loss. For us, without question, it’s the most quietly brutal album of the year. A record made for the times we find ourselves in; a meditation on love and loss in the age of information overload.

King Midas Sound (Kevin Martin / The Bug & Roger Robinson) deliver an exceptionally stark new album; an hour-long study of unravelling love rendered via desolate, beautiful ambient/shoegaze/concrète textures. It’s a quiet, startling album; the vocals sitting high in the mix, the instrumentation recalling Kevin Martin’s work on Experimental Audio Research’s ‘The Köner Experiment’, the atmosphere often suffocating. We’ve sunk deep into it and reckon it’s nothing short of a modern day classic, something like Tricky’s dread-filled Pre-Millennium Tension if it had been produced by Thomas Köner.

It pushes King Midas Sound’s pessimism to heart-rinsing degrees, staging Robinson in a series of vantablack scenes veiled by smoky, minimal synth-lighting, the poet processes irrational and incessant feelings of rejection and loneliness. From the aching desolation of ‘You Disappear’ to the unflinching realisations of ‘X’, the ache imparted by Robinson’s lyrics is only amplified by his quiet stoicism, something that reaches an apex on the emotionally brutal Zeros, recalling Tricky’s incredible side project with Terry Hall ‘Nearly God’, while Kevin Martin finds power in a sense of deferred gratification and his embrace of negative space.

The effect is nothing less than transfixing in the physicality of Robinson’s descriptions and the detached nature of Martin’s sferic electronics on ‘In The Night’, while pangs of lush optimism lend an exquisite contrast to the desiccated riddim and gloom of ‘Alone’, and the sylvan keys in their sensuous reverie, ’Her Body’. But more than any of this, and especially when you start paying attention to the lyrics, it’s an album that raises uncomfortable questions. Are we routing for the forlorn, or the obsessed? It’s this ambiguity, this sense of emotional voyeurism, that makes ‘Solitude’ such a layered, remarkable album. 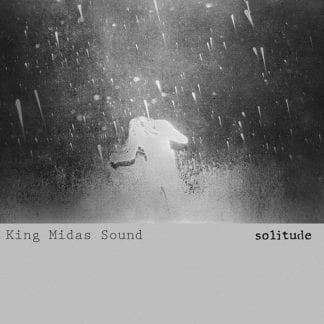