‘The Coastal Invasion’ highlights the golden age of big band cumbia and the maestro who is often seen as Colombia’s most influential composer, Lucho Bermudez.

Bermudez was a key figure who modernised the tropical music of Colombia’s Caribbean coast. At the beginning of the 20th century, this music was largely looked down on. Bermudez changed all that by injecting a modern, jazzy big band sound to the Afro-Colombian sounds from his native region.

The infectious Afro-Amerindian dance rhythms of Lucho Bermudez y su Orquesta took over the elite nightclubs of Bogota and Medellin and from there, his music spread all over Latin America. For many Colombians, the songs of Lucho Bermudez and his wife and starlet singer Matilde Diaz represent the sound of their nation.

This compilation contains a selection of the music of Lucho Bermúdez y su Orquesta recorded during the years that they lived and worked in Medellín, probably the best work the orchestra ever recorded.

An Oligarch of Rhythm

The very first 1949 issue of the SEMANA weekly – the Colombian equivalent of TIMES or NEWSWEEK – featured a colorful portrait of Lucho Bermúdez on the cover. The cover article, ‘An Oligarch Of Rhythm’, explained how the dance music of Bermúdez was taking Colombia and its capital Bogotá by storm.

On the magazine cover Lucho Bermúdez plays the clarinet and is surrounded by fiery dancers and swinging palm trees. The clarinet was a popular instrument for dance bands worldwide, but in the Colombian context it had a special function: it adopted the role of the gaita, the flute played by Colombia’s Amerindians since ancient times. The dancers bottom left on the magazine cover point to another quintessential aspect of Bermúdez’ music: the infectious cumbia and porro rhythms, which are generally considered to be of Afro-Colombian heritage. Lastly, the grooving palm trees signify the region where Bermúdez’ music came from: the Caribbean North coast of Colombia, where porro, cumbia and other rhythms had evolved.

With its tropical climate and mixed population the Carribean coast was almost another world, far away from Bogotá, the chilly capital high up in the Andean mountains with it’s predominantly white population. Bermúdez moved to Bogotá in the mid 40s, and he was the first bandleader from the Carribean coast of Colombia to host his own night at a ritzy club in the capital. Coastal music styles like porro and cumbia were little known here. In those days the Bogotános listened to European and Andean music like bambuco and pasillo: gentle, waltz-based and often melancholic string music of mixed origin but overall with a strong Hispanic flavour. And here was Lucho Bermúdez’ band, Orquesta Del Caribe, serving up loud, infectious Afro-Amerindian dance tunes with an 11 man band: blaring trumpets, soaring saxophones, meandering clarinets, rattling percussion and pounding rhythms. To the ears of the Bogotános the music from the Carribean coast sounded exotic and unconstrained, and was described and even marketed as ‘tropical music’. It both shocked and excited the Bogotános, and eventually developed into a national craze. The Semana magazine wrote:

And as with so many modern dance crazes that captured the youths, the music and its dance rang loud – and often racist – alarm bells among ‘respectable people’ and the establishment. Some years earlier the national daily EL TIEMPO had ran the article ‘Civilization of colour’, pointing out that:

“the blacks have decided to avenge themselves of the bitter fate they bear on their shoulders.. and the attack is advancing against what the previous masters held most dear: against their art. (…) The waltz is dead. The dancer and his partner must jump, swivel their eyes while raising one leg, move their hips in lewd gyrations, cross their eyes and spread their legs like frogs.”

Interestingly the cover article ‘An Oligarch Of Rhythm’, was published in a national political magazine. And indeed the advent of porro was more than just a dance craze: it was a sign of an enormous cultural shift. It brought the Caribbean culture of the coast into the heart of the Colombian establishment, both literally and culturally. Coastal music – musica costeña in Spanish – would dominate Colombian music for decades to come, infecting much of Latin America along the way.

Bermúdez was not the only bandleader who was playing coastal music in big band arrangements for the middle and upper classes to party to, nor was he the first one. The genre had emerged in the coastal towns of Cartagena and Barranquilla, and Bermúdez was one of the bandleaders and musicians that developed the style to suit the burgeoning nightlife. Other influential bands included Orquesta Orquesta A N°1, Atlántico Jazz Band and Orquesta Sosa. Apart from artistic judgment, Bermúdez was the most successful of his generation, and his name is – together with singer and wife Matilde Diaz – for many Colombians synonymous with the Golden Age of Cumbia. This compilation contains a selection of the music Lucho Bermúdez y su Orquesta recorded during the years that he lived and worked in Medellín, representing some of the best work the orchestra recorded. 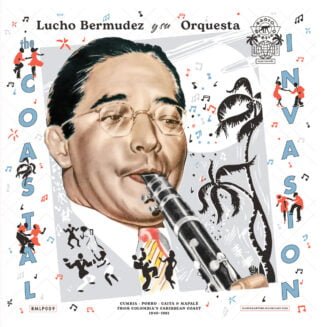 You're viewing: Lucho Bermudez y su Orquesta / THE COASTAL INVASION 35,00€
Add to cart
Manage Cookie Consent
To provide the best experiences, we use technologies like cookies to store and/or access device information. Consenting to these technologies will allow us to process data such as browsing behavior or unique IDs on this site. Not consenting or withdrawing consent, may adversely affect certain features and functions.
Manage options Manage services Manage vendors Read more about these purposes
View preferences
{title} {title} {title}