Between 1978 and 1992, Factory was one of the most important record labels in Britain. It launched the careers of Joy Division, New Order and the Happy Mondays, to name but a few; it opened the legendary Haçienda club and Dry bar; and it introduced to music the concept of high-quality, cutting-edge design. The visual languages developed alongside the music, by designers such as Peter Saville, Central Station Design and 8vo, are still widely recognized and imitated today.

This brilliantly rich and varied volume documents the label’s entire visual legacy. After a foreword by the man most closely associated with Factory, Tony Wilson, who died in 2007, and an introduction that explores the label’s role in bringing design into the mainstream, the book is organized more or less as a chronological catalogue. Every item with a famous Factory inventory number is illustrated or listed, including album sleeves, singles, special editions, flyers, posters, stationery and architectural projects.

Whether you are into design, or simply nostalgic about some of the greatest bands of the past forty years, this book amply conveys the energy, creativity and enthusiasm of one of the most dynamic (and chaotic) record labels ever. 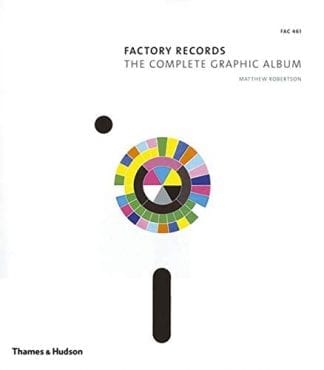 You're viewing: Matthew Robertson – Factory Records: The Complete Graphic Album 29,90€
Add to cart
This website uses cookies to improve your experience. We'll assume you're ok with this, but you can opt-out if you wish.Accept Read More
Privacy & Cookies Policy
Necessary Always Enabled