No doubt you know the name Mort Garson from his myriad writing, conducting, and arranging credits, topping a thousand in total: the Kim Sisters, Gi Sönne, Lola Novaković, Pfc. Craig Brown, Emilio Pericoli. Or failing that, his sides for Patti Page, Mel Tormé, Rosemary Clooney, Percy Faith, and Mr. Magoo himself. Which is to say, Mort Garson’s road to cool cultural caché and the sublimity of Plantasia meant a decades’ long journey through an underworld of sophisticated, international, string-laced dreck (ie, your great-grandparents’ record collection) to arrive at Music From Patch Cord Productions, this set of queasy-listening you now hold.

Juilliard-educated and active as a session player in the post-war era, Garson seemingly never said no in the decades ahead. You could say he was an early adopter to the gig economy, taking any and every job that came his way. He cranked out lounge hits, scored plush arrangements, rendered jingles and TV themes and more, from the late 1940s into the swinging ‘60s. As his daughter Day Darmet put it: “The joke about my dad is he would wake up and work all day until dinner. He would eat dinner, then take a 2-hour nap, then work all through the night again. He was constantly on it.” That meant putting those weeping countrypolitan strings around Glen Campbell’s “By the Time I Get to Phoenix,” making the Simon & Garfunkel catalog sound even more mellow, and making guitar duo Santo & Johnny cover a slew of Beatles’ hits. His charts made Doris Day’s Sentimental Journey even more deliriously mawkish. Garson’s penned hit “Our Day Will Come” moved from Ruby and the Romantics to elevate to the ranks of standard: James Brown, Amy Winehouse, k.d. lang, Isaac Hayes, Tony Joe White, Max Romeo, Yasuaki Shimizu have all covered the song.

At the point in life when a 40-year-old man might undergo a midlife crisis, Garson had a transformation of another sort. He encountered Robert Moog’s early prototype synthesizer at the Audio Engineering Society’s West Coast convention in 1967, purchasing one of the then-$15,000 devices. It was then that Garson’s prolificness cranked into overdrive. “When he found the synthesizer, he realized he didn’t want to do pop music anymore,” Darmet told me. “When he took off into electronic music –for my mom and I– we couldn’t figure out where he was going. He went from super-commercial to waaay out there. The further out he went, the further he got.”

In the span of ten years, Garson’s trusty Moog was the tool for every job. He deployed it to make the proto-typical New Age soundscapes corresponding to every sign of the Zodiac, warped the Wizard of Oz (as the Wozard of Iz), wigged out on Hair with the follicle-frizzing Electronic Hair Pieces. There was no hippie trend that Garson didn’t scour for the chance to land his own countercultural ‘hit.’ To cap that decade, Garson even soundtracked the US broadcast of the Apollo 11 moon landing, which outside of a YouTube clip, has otherwise been lost to time.

But then the ‘60s dream soured and flower power wilted. With the Manson murders and Altamount hanging over the American psyche, Garson also moved towards the darker side. As the ‘70s dawned, he recorded –or perhaps conducted– a black mass as Lucifer. He then embodied the sonic mysteries of the occult as Ataraxia, and even dove deep into UFO phenomena. He also mixed arpeggios and (purportedly) a porn starlet’s “ooohs” for Music For Sensuous Lovers. Most famously, he journeyed through the secret life of plants with his 1976 magnum opus, Plantasia. But between all of those studio projects, Garson also dabbled in an even wider array of sounds, recording days’ worth of material –almost 100 tape reels in all– that never saw the daylight outside of his home studio. (To say nothing of the reams of sheet music that Garson also jotted down, but never got around to recording.)

Music From Patch Cord Productions shows that Garson’s knack was to exist in both worlds, super-commercial and waaay out. He cut delirious minute-long blasts for commercials (as to whether or not they were actually ever aired remains unknown) and spacecraft-hovering études. Were there really account managers out there in the early ‘70s that gave the greenlight to these commercial compositions which seemed to anticipate everyone from John Carpenter to Suicide? What were these campaigns actually for, Soylent Green? Regardless, Mort’s jingle work laid the groundwork for the future. As Robert Moog himself noted: “The jingles were important because they domesticated the sound.” Via Garson’s wizardry, the synthesizer transcended novelty to ubiquity and dominance.

Other curios and questions abound. How did Garson’s arrangement work for Arthur Prysock’s satiny body worship album This Is My Beloved transmogrify into the body-snatcher pulses of “This is My Beloved”? Are the two pieces even related? What is the IATA code for the airport of “Realizations of an Aeropolis”? What denomination is the “Cathedral of Pleasure”? If “Son of Blob” sounds like a hallucinatory melted ice cream truck theme, what on earth does Blob’s father sound like? Every sound wrangled out of that Moog by Garson pushes things further and further out.

Of course, these are all questions that may never get answers, as Garson wasn’t the most organized modern day composer, busy as he was conjuring strange new realms with his circuit boards and synths. He worked and wrote right up until his death in 2008, his daughter and Sacred Bones still going through all of the material left behind. He wouldn’t live to see it, but his renaissance was just around the corner, the seeds that had been scattered in record bins around the world suddenly coming to bear fruit. Take a bite! 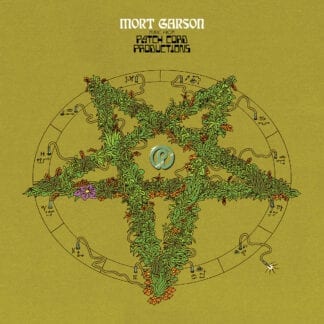