Often missing in Naná Vasconcelos’ discographies, this is in fact the first recorded work to his name, one year before recording for Pierre Barouh’s Saravah label in France the records that introduced him to a wider audience. Offering an early glimpse of his unique approach to music, The Incredible nanà features the first recorded version of “Concerto pra Mae Bio”, a composition Naná redid for his ground-breaking album Africadeus, which effectively appointed him as the world’s most skilled master of the berimbau, the single-stringed Brazilian instrument intrinsically linked to the Capoeira tradition. A brief set of concerts in Buenos Aires in 1971 with saxophonist Gato Barbieri, whose band he had just joined, would result in this one-off studio session with Argentinian guitarist Agustín Pereyra Lucena. Although Naná was already a respected musician back in Brazil as a member of Milton Nascimento’s band and for his participation in numerous albums of the era (often uncredited, as in the third album by tropicalist psych-heads Os Mutantes), it is here that Naná was given the first chance to truly display what music meant for him, and what a berimbau could do.

The vertiginous chain of feats that followed the recording of this album include several Grammy awards, a string of albums for the leading contemporary music label ECM, work with Don Cherry, Pat Metheny, Egberto Gismonti, Caetano Veloso and too many other top-class musicians to be listed here, several original soundtracks as well as being elected best percussionist by the critics poll of the prestigious jazz magazine Down Beat for seven consecutive years. Agustín Pereyra Lucena, then a young musician who had just released his debut album and received praise by the great Vinicius de Moraes, would pursue a life-long career in search of the perfect chord and became the de facto ambassador of Brazilian music in Argentina. Despite having several excellent albums under his belt, he rarely played outside of Argentina and therefore remained relatively unknown to the wider public, but his skills didn’t go unnoticed to visiting Brazilian musicians like Dori Caymmi, Toquinho or Ed Motta, some of whom he befriended or shared a stage with. The recording of this spontaneous, one-off affair remains a witness of what this relationship between two gifted musicians could have yielded had it lasted a bit longer. 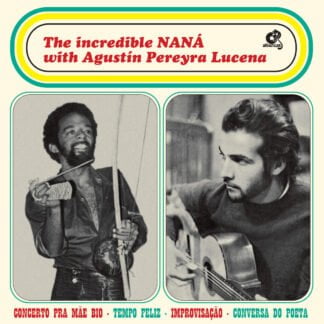 You're viewing: Naná Vasconcelos / THE INCREDIBLE NANÁ WITH AGUSTÍN PEREYRA LUCENA 28,00€
Add to cart
Manage Cookie Consent
To provide the best experiences, we use technologies like cookies to store and/or access device information. Consenting to these technologies will allow us to process data such as browsing behavior or unique IDs on this site. Not consenting or withdrawing consent, may adversely affect certain features and functions.
Manage options Manage services Manage vendors Read more about these purposes
View preferences
{title} {title} {title}