“Nostalgia Por Mesozóica” is an exploration of “experimental exotica” consisted of synthesized tropical attributes — an artificial landscape isolated behind the glass frame. Reminiscent of recording techniques and sonorities ubiquitous in the 60’s and 70’s, it could conceivably have been intended as a soundtrack for the Mesozoic Era exhibition at your favorite Natural History museum.

Nikolaienko has described Muscut’s mission as a kind of “audio archaeology”—perhaps in reference to the dusty, cryptic air of the label’s music, which takes inspiration from the abstracted sounds that Daphne Oram and Delia Derbyshire were creating with the BBC Radiophonic Workshop in the ’60s. On the label founder’s upcoming record, due out in May, he extends his archaeological obsession to the natural history museum. Nostalgia por Mesozócia is framed as an imaginary soundtrack for fossil exhibitions and dinosaur dioramas. Its nostalgia is many-layered: Analog chirps and liquid gurgles summon images of 200-million-year-old rainforests, while wheezing organs and clanking marimbas evoke the easy-listening exotica made popular in the ’50s by artists like Arthur Lyman. Mingling kitsch with surrealism, it makes for a fanciful and engrossing trip into the past. — Pitchfork (Philip Sherburne)

‘Nostalgia Por Mesozóica’ is Nikolaienko’s attempt to recreate an exotik mood while channeling the imagined world of the dinosaurs. He wanted to produce a Natural History museum soundtrack to the Mesozoic Era (the “Age of Reptiles” comprising the Triassic, Jurassic and Cretaceous periods), and has managed it by combining the quirky organ music and Fourth World-adjacent percussion that became the staples of the exotica genre. In Nikolaienko’s hands, it’s approached with love and care – his sound sources are familiar and funny – with clearly a lot of genuine love for the subject matter.
‘The Ancient Musical Complex Of Mammoth Bones’ deploys bargain basement plastic rhythms offset by Nikolaienko’s odd electronic treatments and hypnotic synths. ‘Misantropicalia’ is a swampy approximation of a distant era, using nostalgic memories of the past to connect the dots between aesthetic oldness, archaic global musical traditions and a collapsing culture. At its best, the album sounds like the high points of ex-Skater Spencer Clark’s varied catalog (think Vodka Soap or Monopoly Child Star Searchers) and harmonizes with Christina Vantzou’s bizarre and brilliant “Multi Natural” full-length. — Boomkat

Ukrainian label Muscut operates in its own weird and wonderful electronic universe, and next up is a first new record from Nikolaienko in four years. It finds him collaborate with Arthur Mine, a Kyiv-based keyboard maestro and an ex-member of the Blacklazer band, on music that is best described as eerie and exotic experimentalism. Occult real world recordings of water, birds, wood and metal are sprinkled over ambient synths to make for jungle soundscapes and retro fairground soundtracks that are bonkers and bizarre in equal measure. The natural and unnatural have rarely sat together in such perfectly unsettling harmony. — Juno

Coinciding with the Ukrainian label’s eighth birthday celebrations, Dima Nikolaienko‘s Muscut imprint celebrate a landmark occasion with the release of a limited 10″. Four years since the release of Nikolaienko’s last collaborative LP, Nostalgia Por Mesozóica finds the label founder collaborating with Kiev-based composer, keyboard master and former Blacklazer member, Arthur Mine. Built of synthesised tropical sounds, Nostalgia Por Mesozóica is an “exploration of experimental exotica.” ‘Troglodytes’, for example, reimagines the age of dinosaurs and their leaky cave-dwelling existence, through a distorted and nostalgic lens that evokes movie soundtracks from the ’60s and ’70s. — if-only

Nikolaienko is a bit like Piotr Kurek in that he also creates his own separate musical world, his own kaleidoscope of stylistic connections. After last year’s Rings, he recorded an album that’s like an archaeological excavation in musical terms referring to prehistory and its imaginary soundtrack, visits to a wild forest and a museum of curiosities. The aqueous electronic passages remind me of the achievements of the BBC Radiophonic Workshop and the innovative solutions devised in the 80s by experimental studios in Cologne or Warsaw. Sometimes there are melodic outlines reminiscent of the hauntological expeditions and trance like repetitions that can be found in early Sun Araw records (‘Tryglodydes’). Alchemical combinations of musique concrète, samples, synthetic parts with fairy-tale melodies (‘Muzak For Mesozoic Showreel’) and sound-art (‘Dark-Archeo’), produce a varied, fascinating and original music narrative. The Quietus, Jakub Knera 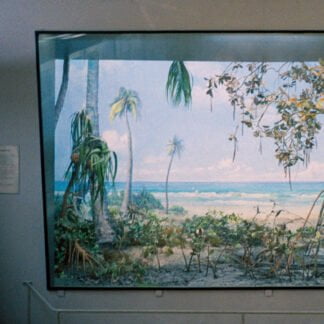 You're viewing: Nikolaienko / NOSTALGIA POR MESOZÓICA 24,00€
Add to cart
Manage Cookie Consent
To provide the best experiences, we use technologies like cookies to store and/or access device information. Consenting to these technologies will allow us to process data such as browsing behavior or unique IDs on this site. Not consenting or withdrawing consent, may adversely affect certain features and functions.
Manage options Manage services Manage vendors Read more about these purposes
View preferences
{title} {title} {title}