Composer, clarinetist, singer & spiritual jazz soothsayer Angel Bat Dawid descended on Chicago’s jazz & improvised music scene just a few years ago. In very short time, the potency, prowess, spirit & charisma of her cosmic musical proselytizing has taken her from relatively unknown improviser to borderline ubiquitous performer in Chicago’s avant-garde. On any given night you can find Angel adding aura to ensembles led by Ben LaMar Gay, or Damon Locks, or Jaimie Branch, or Matthew Lux, or even, on a Summer night in 2018, onstage doing a woodwind duo with Roscoe Mitchell. For her recorded debut on International Anthem, The Oracle, we’ve chosen to release a batch of tracks that Angel created entirely alone – performing, overdubbing & mixing all instruments & voices by her self – recorded using only her cell phone in various locations, from London UK to Cape Town RSA, but primarily from her residency in the attic of the historic Radcliffe Hunter mansion in Bronzeville, Southside, Chicago. 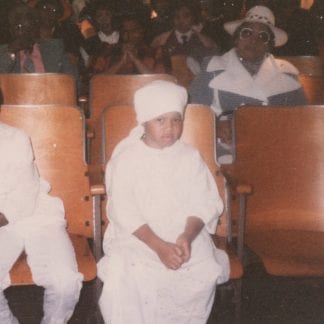 You're viewing: Angel Bat Dawid / THE ORACLE 30,00€
Add to cart
Manage Cookie Consent
To provide the best experiences, we use technologies like cookies to store and/or access device information. Consenting to these technologies will allow us to process data such as browsing behavior or unique IDs on this site. Not consenting or withdrawing consent, may adversely affect certain features and functions.
Manage options Manage services Manage vendors Read more about these purposes
View preferences
{title} {title} {title}