Flared suits, Brutalist discos and working-class folklore, Liscio is the lost Italian music scene that ignited 1970s dancefloors. A Socialist provincial answer to the American imperialism of disco, Liscio was a cross-generational movement that represented an alternative to foreign sounds.

Celebrating this culture, a new book titled Liscio Got Me Hardcore – published by Mondo Erotico Publishing and curated by Ragazzi di Strada (an archival project curating Italian subcultures and youth style led by journalist Lorenzo Ottone) delves into its aesthetics and culture, bringing back to the surface hidden gems of a long-overlooked scene and the Italian youth of the time.

Quintessentially North Italian and fundamental to the location’s working-class, Liscio has long been an overlooked music genre and a neglected cultural phenomenon. Musically rooted in the folk tradition of Emilia Romagna, a region that has been pivotal for the history of Italian clubbing – there lie the origins of Italo Disco and House, as well as a consistent part of the 1960s Beat and Garage scene – Liscio had its heydays between the mid-70s and the early 80s. Despite the other subcultures of the time – like punks and rockers – looking down on the genre and dismissing it as a ‘mainstream’ and ‘square’ scene, Liscio had a strong ethos and impact on the community that continues to inspire today.

In Lissio, a 1978 documentary aired by RAI, the Italian state television, one of the scene’s most influential musicians, Raoul Casadei, highlights the philosophy behind the movement: “We can talk of a Liscio way of life. Simple people who wake up, shave, cycle or ride a scooter to work, to the factory. It’s everybody’s genre. It’s a culture that makes people sing, be calm, it makes them get together and lose their shyness.” These words underline the affinity of Liscio with other international music genres and scenes of the time like British Northern Soul, African Zamrock and Afrobeat, or American Funk and Disco; their shared sense of community and feeling of collective escapism and ecstasy.

Argued by the likes of Italian music journalist Lorenzo Cibrario, Liscio even carried a political statement, albeit somewhat unconsciously. The genre, in fact, could be perceived as the Socialist resistance of the autochthonous culture towards the roaring American invasion represented by disco music and Liberalist economy in 1980s Europe. Liscio definitely holds the flavours, feelings and colours of a now long-gone Italy, the country that slowly started to vanish by the end of the 80s and mutated with the appearance on the political scenario of television mogul, AC Milan-owner and former prime minister Silvio Berlusconi.

Liscio came paired with surprisingly avant-garde aesthetics: from the dancers and orchestras’ outfits, to the venues it lit up. The so-called balere (translation: dance hall), were often spaces of radical architecture that simultaneously nodded to both Brutalism and visionary Space-Age aesthetics. The Ca del Liscio (House of Liscio) in Ravenna, is one of these, a combination of cubic and spherical volumes furnished with grey velvet-clad sinuous Italian radical design sofas. On the dancefloor, it’s an eccentric clash of late-70s styles: from flared polyester suits to New Wave-inspired kids in leather trousers and sand-toned trench coats. On the stage is Raoul Casadei in an Elvis-style white jumpsuit, warming up the immense crowd with snappy, tongue-in-cheek lines that mirror Jamaican Reggae DJs toasting on Kingston sound systems, or those of Hip Hop MCs from late 70s Harlem.

It’s usually a female singer, though, to front a Liscio orchestra, a sign of great emancipation in the often deeply Catholic provincial culture of the time. Wrapped in lavish satin dresses, these North Italian provincial muses tended to be seductive characters who took a great degree of pride in their role of guardians of this new culture. Under the spotlight, they looked like the 1970s embodiment of those Emilia Romagna women Fellini was captivated by as a kid and subsequently portrayed in Amarcord.

40 years on from its more recent revival, Liscio clearly stands out as something more than a local music scene or folklorist tradition. It could, in fact, be considered as a lost subculture with its precise sound, aesthetics and lifestyle. This is what is uncovered in Liscio Got Me Hardcore – Graphics and Aesthetics of Italy’s Last Folklorist Scene, a volume that dives into this genre from an unusual perspective oriented towards the scene’s aesthetic and cultural heritage. Based on a series of retrieved rare photographs and music sheets, the publication approaches the scene with the due detachment of post-subcultural theories and a contemporary viewpoint. 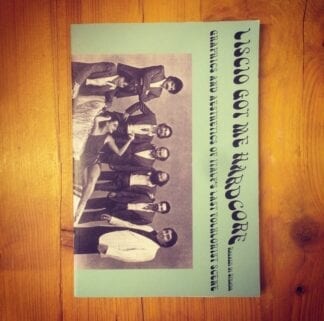