A reissue of Robbie Basho’s Basho Sings, originally released in 1967.

It’s become an oft-quoted statement that John Coltrane was the Father, Pharaoh Sanders was the Son, and Albert Ayler, the Holy Ghost. It could arguably apply to the holy trinity of steel string guitarists as well. Many claim John Fahey to be the Father, Kottke was considered the Son, and Robbie Basho would certainly be considered the Holy Ghost. The Basho/Ayler similarities are many, and both pushed their idioms further physically and emotionally than all of their respective contemporaries. Basho Sings was Basho’s fifth release for the Takoma label and as the title proclaims, Basho Sings showcases a unique voice that transcends the limitations of the vocal form. He’s left the pentatonic raga scales of his previous releases and showcases a unique and unparalleled take on the folk/blues song idiom. A truly outsider take on the American primitive genre. 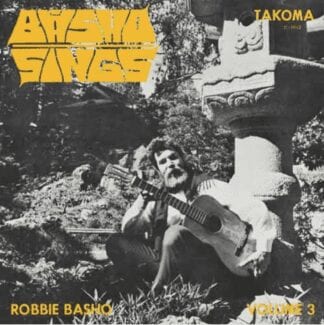