In the past years we’ve seen many cool albums released as they were, just beautiful music artifacts with no particular purpose rather than pleasing the most trained ears in the underground scene of music listeners and cassette tapes aficionados.
After a big research involving a copious amount of people including musicians, housewives and household management’s scientists, Artetetra, in collaboration with the bolognese crew of Islandsexp, ended up with a catalogue of music that serves both as a pleasing acoustic experience and as a tool for a more productive and functional house-working. This music is designed to instantly make you work on a specific subject, channeling the energies and improving your simple and ordinary performances.
For this new tape-series Artetetra returns home from the exotic lands of quinto mondo and enters your kitchen to infiltrate into your daily routine.

Shit&Shine, pseudonym of Craig Clouse and his multiple formations, is very known between noisy and trippy music lovers. With plourimous releases through inspiring labels such as Editions mego, Diagonal and Load, Shit&Shine proposes since more than ten years a ravaging yet hypnotizing iteration of sounds that has touched the borders of electronic music as well as noise rock and pure drumming patterns extravaganza. Psychedelic, acid and unpredictable in his repetetiveness and deep research into spaced-out sounds, Craig Clouse and his project are spokesman of a way of conceiving music more than a style itself. In common with his latest releases Shit&Shine dives into bidimensional digital sounds and dystopic grooves in between Italo-disco and twitching rhythms. 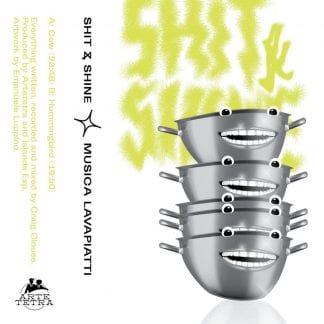