Divided into four sections, books, scores, records and documents, “Sound Pages. John Cage’s Publications“, (catalogue of the exhibition with the same title at the International Museum of Music, Bologna) systematizes an important part of John Cage’s work addressing the theme of the various productions which the American composer produced, often upsetting the traditional components and structures of composition. Cage has posed the problem of making the sound an object which is sensitive to the visible: texts, books, scores become visual entities in all respects in which the artist tries to juxtapose syntactic connections to a new dislocation of the characters on the surface sheet according to canons and criteria that are purely visual. Edited by Giorgio Maffei and Fabio Carboni, Sound Pages is an editorial project that shows how the complexity of John Cage’s thought, but also his disarming simplicity, have added “beauty” to the printed page so as not to allow the sound space to dissipate in the moment of the interruption of the sound and fix in time its translation in visual space. 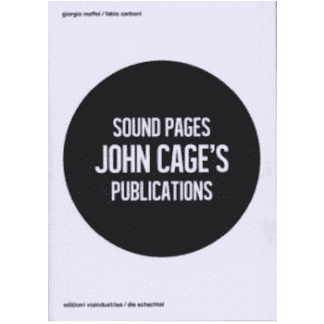