This new SPAZA release is the original motion picture soundtrack of the film UPRIZE!, but it serves a parallel function. Recorded in Yeoville, Johannesburg, during a three-day improvised scoring workshop in 2016, the recording is almost the underside of the film, which strikes a defiant pose both in the selection of speakers and in the tone of much of the archival footage.

In South Africa, 16 June 1976 is unanimously recognised as the definitive turning point in the tenor and intensity of the fight against apartheid. It comes as the internal capacity of the major liberation movements such as the African National Congress and the Pan Africanist Congress is nearly depleted; with many of its leaders in jail or in exile. Black Consciousness (BC) arises from these ashes and the apartheid regime scrambles to contain it in the form of assassinations, banning orders and trials. High school youths in Soweto, having already imbibed BC from their teachers (a group of newly-recruited university radicals), begin planning protests that would attain an incredible kinetic thrust. These demonstrations were supposedly to rally against the use of Afrikaans as a medium of instruction, but as student leader Tsietsi Mashinini says in the documentary film UPRIZE!, the situation in South Africa had been explosive for a long time and any issue could have delivered the shift in momentum that June 16 would symbolise.
The June 16 protests stretched over several weeks in a countrywide blaze that turned out to be a sustained show of solidarity among students and an unbridled display of brutality by the state. The recording process mirrors that protraction, working out a new language with which to commemorate the death, darkness and defiance of those days.
The sessions for the second SPAZA release — which comes off the back of 2019’s critically acclaimed eponymous debut — featured bassist Ariel Zamonsky, percussionist Gontse Makhene, pianist, trombone player and singer Malcolm Jiyane, as well as vocalist Nonku Phiri. Besides Zamonsky and Makhene, who return to their stations at the rhythm section, Phiri and Jiyane are new inductees into the open-ended SPAZA philosophy. As in the initial release, the idea of SPAZA is to jam around a concept rather than to coalesce into a fully-fledged band. For this outing, Jiyane, a singular — and solitary — talent and leader of the Malcolm Jiyane Tree-o, brings an intuitive compositional maturity that threads the improvised sessions together. Phiri brings a vulnerability that turns out to be her superpower, confidently reshaping her voice to each emotional turn as suggested by the footage.

The adventure of scoring, even more so, scoring a film that is still being put together — meaning only snatches of footage and audio were available to the musicians via a projection on the wall of the living room in which they were recording, to which they would respond with improvised performances — had a direct bearing on the outcome of the recording. Adding further contours was the clear preconception of what the music ought to conjure. By playing vinyl in between sessions, musical directors Nhlanhla Mngadi and Andrew Curnow decidedly steered the session towards the intensely improvisational and avant-gardist aesthetic of groups such as the Arts Ensemble of Chicago. If Zamonksy’s bass seems to be providing more than mere fundaments and Makhene’s percussion a little more prosaic, put it down to the references but also an intent to represent the stories of those who lost their lives during ’76’s tumult.

Similar to SPAZA’s previous release, there is a veil of heaviness permeating the air, this time thickened even further by the heavy mesh of the interpolation of the film footage. The sonic palette here consists of interview clips and other sounds from the film, interweaving with the mournful sounds from the recording process. The sprawl of the three-day vigil is turned into a concise testament thanks to the interventionist approach to the album by the producers and recording/mixing engineer Dion Monti’s ability to circumvent the complications of an indoor “field recording”.

Much like how 16 June 1976 signalled a change in momentum for South Africa’s struggle, so too has the recording of this original motion picture soundtrack been transformative to the lives of all involved. The musicians, each with serious catalogues and/or pedigree in their respective scenes, put their individual talents towards a collectivism that is analogous to the music and the moment being honoured here.
credits 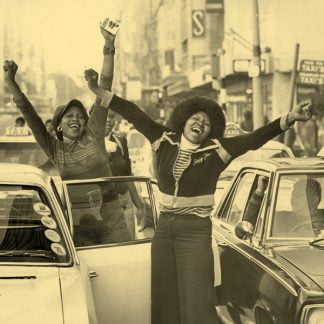