Special Interest’s songs recall the art rock of Sparks and The B-52s as much as politically-minded punk, and on “Midnight Legend,” the group is more overtly pop than ever before — making something fun during a time of frequent sadness became a central priority. But that doesn’t mean anything is simple or surface-level, with a darkness often treading beneath the smooth production. For as much as the band plays with dissonance, Maria Elena’s expressive guitar work and Nathan Cassiani’s grooving bass lines effortlessly weave together, and shade out the soundscape brought into existence by Alli Logout’s commanding vocal presence. 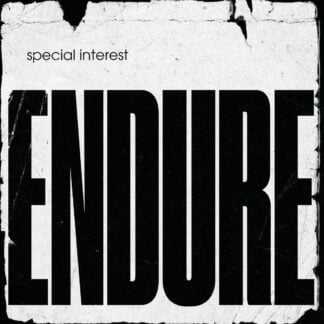 You're viewing: Special Interest / ENDURE 28,00€
Add to cart
Manage Cookie Consent
To provide the best experiences, we use technologies like cookies to store and/or access device information. Consenting to these technologies will allow us to process data such as browsing behavior or unique IDs on this site. Not consenting or withdrawing consent, may adversely affect certain features and functions.
Manage options Manage services Manage vendors Read more about these purposes
View preferences
{title} {title} {title}