Tropicantesimo is a multisensual project with sound and dance in the center. It keeps within its core the colors of the flowers and the tropical forest, the fruit flavors and the humours of the earth parched by the Sun. But above all, it embodies the sounds and the tribal rhythms of the equatorial zone. Tropicantesimo is a cocktail of sexual hips and
maracas shake in the air. With its sound experiments, floral installations, dreamlike visions of gardens against nature, It is the natural construction of an artificial paradise.
It all started 10 years ago at the Fanfulla club in Rome. Meanwhile the collective animated by DJ Hugo Sanchez, Lola Kola, Rocco Bartucci, Gabor and Egeeno moved to a new club called Pescheria, and opened up to spontaneous live jams and collaborations with musicians and DJs.

Tropicantesimo has no home, it is located in the known world beyond, between a mythical El Dorado and a run-down place that sells alcohol to under the table during Prohibition era.
Tropicantesimo is a sonic kaleidoscope that multiplies and mixes the sound references. With a network of multiple and inconsistent sound sources, the exoticism of these musical worlds becomes an illusion. Beautiful and evil chimes, white magic and crow’s feathers, everything changes in shape and in size, everything is hot and chilling. The unpredictable, the accidental, the wonder, the imminent and the stillness. Tropicantesimo turns itself on, nothing has happened, it was just the sound of noises and rhymes. What it was, where he came from, why. 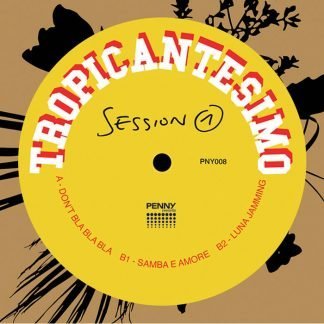