Since five years Artetetra has launched its relentless research into the outlandish contemporary post-geographic imageries inquiring the possibilities of a whimsical recomposition of the multiple and scattered fragments that form the transglobal digital brainthrust; always with a flamboyant, unorthodox signature tongue-in-cheek approach.

Exotic ésotérique Vol.3 is the third chapter of explorations in the lands of the melting people as well as of their unfurling sonic languages and future pidgins: a lysergic documentarian cartography of the e-ukiyo: the internet’s floating world. The beloved Italian nefarious underground corporation presents once again its skewed aural manifesto marking the new unfolded boundaries and exotic topologies freshly charted by means of fictional superimpositions between different real and unreal auditory worlds.

After two more years of under-the-radar investigations in the pataphysical lip, the result has pretty much the shape of a coalescing quirky archipelago inhabited by undiscovered life forms with different degrees of reality, linguistic configurations and ontological statuses. EE3 is a suggestive succession of strangely assembled pieces of micromondo miscellanea as small bizarre objects and surreal items right for Artetetra’s continuously metastasizing outré wunderkammer.

But let’s get down to the nitty-gritty:
STILL NOT MUCH 3 SAY
NEO°GEO 3.0
30 TRACKS
30 IMAGINAL FAMILY SUPERSTARS
2H OF HAILE MUZAK FROM THE FLOATING WORLD
FUN IS THE MF GUN 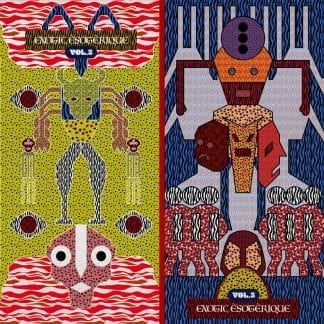