Ganzfeld is a phenomenon of perception caused by exposure to an unstructured, uniform stimulation field. This is mostly the description used when talking about visual perceptions and the loss of depth of field and dimensional perception.
For example, when looking at a flat red screen for a long time, or by staying for a long time in diffused red light (Ganzfeld Experiment), our ability to see changes and reimagines things through a distorted set of rules.

In 2017, during a residency at Venezia Biennale for Xavier Veilhan’s “Studio Venezia”, Von Tesla laid down the first ideas for trying to achieve a similar effect through the use of multiple layers of electronic music, with seemingly random beats, layers of discordant melodies and other electronic trickeries.

The result is the mammoth double album “Ganzfeld”, 133 minutes of new music which demonstrates how Von Tesla is able to design an alienating futuristic atmosphere, always bringing the listener into unknown electronic territories of interpretative chaos filled with an otherworldly aesthetic and an experimental driven attitude. 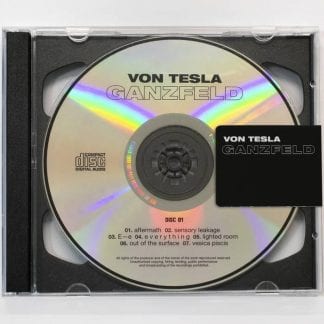 You're viewing: Von Tesla / GANZFELD 15,00€
Add to cart
Manage Cookie Consent
To provide the best experiences, we use technologies like cookies to store and/or access device information. Consenting to these technologies will allow us to process data such as browsing behavior or unique IDs on this site. Not consenting or withdrawing consent, may adversely affect certain features and functions.
Manage options Manage services Manage vendors Read more about these purposes
View preferences
{title} {title} {title}