Mysterious production unit Waveform Transmission make their third release, and the second for Astral Industries, in impeccable style — utterly immersive, a realy work of art from front to back.

There’s real storytelling at work on this rather splendid double vinyl score, whether it’s in hints of tropical birdsong, the fluid motion of rhythms built from water, or the waves of breezy synths that seem to blow past (or through) your ears. Everything feels like it’s setting a specific scene, conjuring images that are both vivid and abstract – colours acting as characters, and feelings as locations.Following on from V2.0-2.9 comes the logically titled V3.0-3.9, and the new release picks up where the last left off. Four sprawling tracks running between 15 and 20minutes each, there’s density here in spades giving enough depth to throw, or lose yourself in. Despite the scope, though, there’s something strangely intimate here, too, meaning quite where you wind up is nobody’s business but yours. – Globalgroove.co.uk 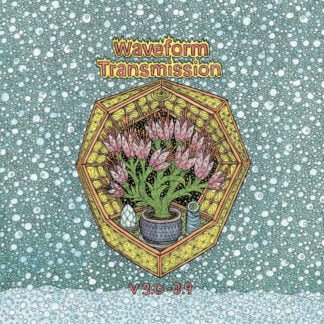 You're viewing: Waveform Transmission / AI-20: V 3.0-3.9 39,00€
Add to cart
Manage Cookie Consent
To provide the best experiences, we use technologies like cookies to store and/or access device information. Consenting to these technologies will allow us to process data such as browsing behavior or unique IDs on this site. Not consenting or withdrawing consent, may adversely affect certain features and functions.
Manage options Manage services Manage vendors Read more about these purposes
View preferences
{title} {title} {title}