This at length awaited CD version includes contents from the original 1983’s LP Autumn Resonance / Domino Figures released by danish label Paula. Inedited Voices Recurrent and Music for 21 Clarinets are available along with linear notes written by the author, echoing the current value of his experimental approach to the sound practice.

A selection of the most radical impressive works composed by Wayne Siegel when he was mid-twenties. Moved to Denmark, between 1979 and 1980, he began to investigate possibilities of a very personal language, contributing to mould the heterogeneous kaleidoscope of Post-Minimalism results. The early works are constructed around a relentless musical process that consists of delaying and repeating every element in a certain measure, without intentional alteration. Siegel called this process canon technique, letting it to become over time his nutritious obsession. 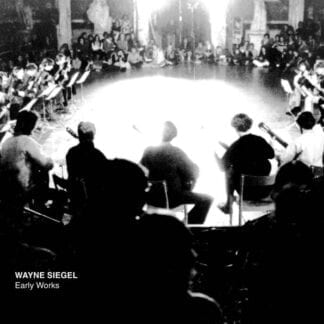 You're viewing: Wayne Siegel / EARLY WORKS 15,00€
Add to cart
Manage Cookie Consent
To provide the best experiences, we use technologies like cookies to store and/or access device information. Consenting to these technologies will allow us to process data such as browsing behavior or unique IDs on this site. Not consenting or withdrawing consent, may adversely affect certain features and functions.
Manage options Manage services Manage vendors Read more about these purposes
View preferences
{title} {title} {title}