Yellow Swans ended the same way it began: with a plan. Back in 2001 I was looking for a way out of the East Bay where the first dot-com gentrification crisis was grinding me down. I’d met Pete at a house in SE Portland when my band Boxleitner had driven up there in the middle of a blizzard a few days after Y2K. Turns out I had seen Pete’s old band Mur*der play in the same neighborhood a while before which had made me want to start Boxleitner with George Chen in the first place. Pete and I agreed that if we were ever in the same town we’d start a band. Shortly after I’d decided to exit the Bay and move up to Portland I got an email from Pete asking if I thought we could get a band together in time for a show a few weeks later. I hadn’t packed yet. We hashed out an idea of what it was we wanted to do and a few months later ended up with our first gig.

When it came time to end the band it was the same deal. We’d finished another grueling 5 week tour across the US, both of us exhausted and not actually liking each other very much. For me, I knew we had maybe another year of this kind of tour-record-tour grind before we’d never want to look at each other again. I figured that if this band was at its end we might as well do it on our terms, in a way that meant we could respect ourselves and still be friends in the future. We made a list of things that each of us wanted to accomplish before pulling the plug on the project, and releasing a final album was at the top of the list. We spent a year working on this recording, most of it cut in live single takes in our space below Rotture, in the basement of the dance club/venue that our buddies ran. The music has all of the feeling and emotion that comes with letting go of something that we’d just devoted almost every day of our young adult lives to. We were also probably at our physical and mental peak of performance, having toured and played constantly for years. We were more in the zone during these sessions than we’d ever been.

We were both chomping at the bit to move on with our lives – both of us were destined to move out of Portland and go back to school – and it wasn’t lost on us that we were sacrificing a band that was still building an audience and growing artistically. We were a bit pessimistic that the band would ever get past the “noise ceiling,” so the idea that this band was “going places” seemed ridiculous to us. All the same, the music felt vital and necessary, and time has shown that it was the album of ours that would continue to connect with people long after we’d both gone our separate ways. There was one thing that almost tanked the record… we couldn’t find cover art that worked. We had two failed attempts with other artists before landing on Jefre’s cover. I still find it a haunting picture, because somehow it actually captures the view from wherever it is we went when we played that music. 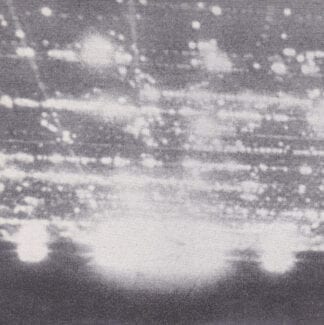