Angel Bat Dawid, who first met Emma Warren at Total Refreshment Centre in 2017, composed & recorded “Transition East” alone in her space on the Southside of Chicago, originally to be accompaniment for the audiobook version of “Make Some Space.” Angel conceptualized & named the song in commemoration of the storied Chicago community center that was a hub for the AACM and icons from the Black Arts Movement in the 1960s, and was recently revived by one of her mentors, Eliel Sherman Storey.

International Anthem is proud to present these two beautiful pieces of music on deluxe 45rpm 7″ vinyl inside a picture sleeve designed by Jeremiah Chiu. Available as a standalone item or as part of the MAKE SOME SPACE FOR US bundle – alongside Emma Warren’s “Make Some Space” paperback and a new “foreward” in the form of a screed written by Piotr Orlov (connecting the book & the music into the current context of our spaceless/timeless struggle) printed on a 17″ x 22″ broadsheet (also designed by Jeremiah Chiu). 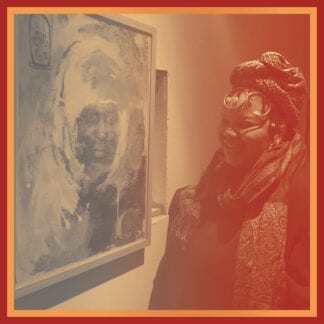