A revelatory discovery in the Tinariwen archives, Kel Tinariwen is an early cassette tape recorded in the early 90s that never received a wider release, and sheds new light on the band’s already rich history. Not having yet developed the fuller band sound that they became internationally established with, Kel Tinariwen features their trademark hypnotic guitar lines and call-and-response vocals weaving in between raw drum machine rhythms and keyboard melodies that almost evoke an Arabic take on 80s synth-pop. There’s distinct parallels with the sounds found on this tape and the work uncovered in recent years by cratedigger labels such as Awesome Tapes From Africa, Sahel Sounds and Sublime Frequencies.

In the summer of 1991, four members of Tinariwen travelled to Abidjan in Ivory Coast to record the band’s first official release, Kel Tinariwen. They were Abdallah Ag Alhousseyni, Hassan Ag Touhami aka ‘Abin Abin’, Kedou Ag Ossad and Liya Ag Ablil aka ‘Diarra’. The project was the brainchild of Keltoum Sennhauser, a painter, poet and songwriter of mixed parentage (her father was a Sonhrai, her mother a Touareg), who grew up partly in Bamako, partly in the Kidal region of north-eastern Mali, the homeland of all the members of Tinariwen. Like so many Touareg from that region, Keltoum and her family had been forced to emigrate by the droughts that tore the Touareg world apart in the mid 1970s and 1980s, as well as all the oppression and suffering that had followed independence in 1960. Keltoum became deeply involved in the Touareg struggle for freedom and self-determination and saw music in general and music of Tinariwen in particular as an essential part of that struggle.

Kel Tinariwen was never heard outside of the local community that traded cassettes back in 1992 – an activity that was important to the movement, as Keltoum explains: “I think the cassette played crucial role as a tool of communication, a tool that was very dear to us. It served to raise awareness and awaken the consciences of those who felt that everything was already lost, or that we didn’t have the wherewithal to win our struggle. It allowed the Touareg world to develop its own conscience and move forward. In our milieu, the only thing that can make us question ourselves is music. Because we listen to a lot of music, we love music, we love poetry. We don’t read. We’re not a people who read. So, the only reading we have, about ourselves and about the outside world, is music.” Thirty years later, the album is finally seeing an official release, on vinyl, CD, and cassette to pay homage to its original format. 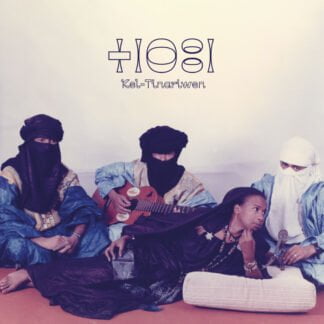 You're viewing: Tinariwen / KEL TINARIWEN 28,00€
Add to cart
Manage Cookie Consent
To provide the best experiences, we use technologies like cookies to store and/or access device information. Consenting to these technologies will allow us to process data such as browsing behavior or unique IDs on this site. Not consenting or withdrawing consent, may adversely affect certain features and functions.
Manage options Manage services Manage vendors Read more about these purposes
View preferences
{title} {title} {title}