The follow up, Volume 2, continues what the first volume started with interviews with heavyweights in the music genre including Jim Adkins (Jimmy Eat World), Chris Conley (Saves the Day), Bob Nanna (Braid), authors and scene veterans Trevor Kelley and Leslie Simon, and the final interview of emo scene legend, Jon Bunch (Sense Field) prior to his untimely death in 2017. 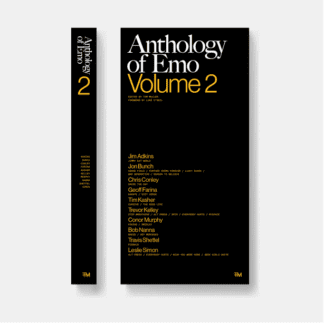 You're viewing: Tom Mullen/Washed Up Emo / ANTHOLOGY OF EMO: Volume Two 30,00€
Add to cart
Manage Cookie Consent
To provide the best experiences, we use technologies like cookies to store and/or access device information. Consenting to these technologies will allow us to process data such as browsing behavior or unique IDs on this site. Not consenting or withdrawing consent, may adversely affect certain features and functions.
Manage options Manage services Manage vendors Read more about these purposes
View preferences
{title} {title} {title}